10 Ways to Use Snapchat to Market Your Business 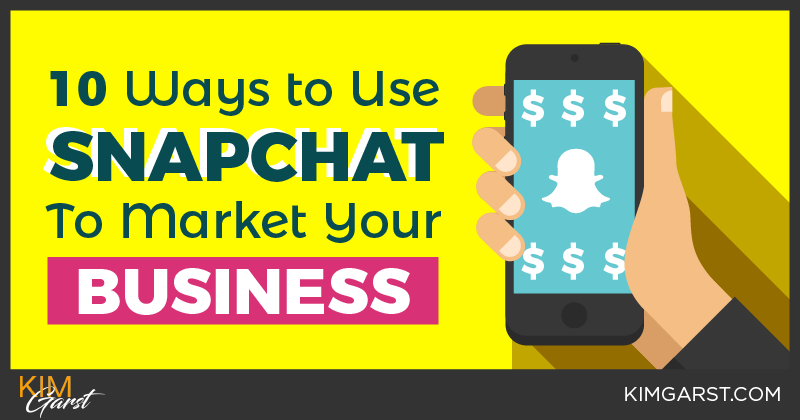 Is your business using social media to target prospects and turn them into customers?

I am not normally one to shout but IT SHOULD BE!

I just returned from keynoting at Social Media Marketing World 2016, in San Diego and one of the hottest topics there was “SNAPCHAT”.

How about that Snapchat?

I am guessing that you’ve heard of it, and have maybe even played around with it a little,  but never used it for business right? For those of you who have not, Snapchat is a mobile photo-messaging service which allows its users to take photos and videos and share them with friends. Each share remains viewable for a very limited time.

Why Snapchat for Marketing?

Seriously!? Snapchat has a business application?

But can you get traffic there?

As one example, Cosmopolitan magazine is getting 3 million views a day on Snapchat.

Snapchat currently has 100 million active DAILY users who watch 7 BILLION videos per day and share nearly 9000 photos every second. Those figures are set to increase as Snapchat has expanded the services it offers to include new features such as live text plus voice and video calls between contacts.

That’s a lot of people, many of them potential customers, flying under the radar of most marketers.

Here are 10 ways to plant your flag and make Snapchat a new marketing channel for your business.

One sure fire way to turn people off  to your social media efforts is to constantly churn out sales pitch after sales pitch and Snapchat is no different in this respect. Remember you’re human and so is your target audience. So say something that will interest your followers. Don’t be all about you, you and you!

Yes, the aim is to increase sales, but at first you need to build a relationship with your followers and gain some trust. Posting varied, but interesting content and responding in a personal manner is what will do this for you.

Other than sales speak, think about something else that is specific to your business. For example, if you're a cell phone retailer, why not create an unboxing video for the latest iPhone or show your followers how to change a password or download an app?

Unlike Instagram and Facebook, your posts (snaps) can only be seen on Snapchat for a short amount of time, so that means the quality of your videos does not have to be up to the same standard, which in turn means they cost less and take less time to produce.

4) Go behind the Scenes

Invite your fans to take a look behind the scenes of your office party, or take a quick peek into your warehouse or shipping room. Where you choose doesn't really matter, as the point of this is kind of content is to increase a follower’s feeling of connection with you and your brand.

I have to admit that I haven’t watched too many soccer game in my life, but I love this story and the clever use of Snapchat to tell it.

In a European soccer first, the English Premier League club Manchester City recently invited its fans to get closer to the action on Derby Day. The club hosted a Snapchat story from its five supporter locations across the world: Manchester, New York, Melbourne, Indonesia and Hong Kong. The story offered fans the chance to see what it was like to be watching the game and cheering on the team from the perspective of different fans.

Why did they do this?

Businesses which foster relationships with their followers not only builds, but also a feeling of togetherness. You can see this in the way in which Apple’s iPhone users fervently defend the company and its products so much so that it has an army of brand evangelists.

Snapchat offers you the opportunity to get users of your products excited about an upcoming new addition or update. You can use images and video to tease them and, if done well, create some early buzz and chatter about it.

With that in mind I think it's the perfect platform for product launches because, unlike others in which your updates can get lost in time related feeds, posts on Snapchat remain viewable until opened by the user. This approach I think naturally fosters much more engagement.

At no time prior to now has that ever been more true. Seriously, you will live and die by the quality of content on social media and Snapchat is no different.

One method of increasing your follower count is to make great stories and share parts of them with followers on other social networks. The idea is to make the content so compelling that the Facebook, Twitter or even Instagram user follows your lead and pops over to Snapchat to find out what all the fuss is about. There’s a good chance that if they follow you elsewhere they may not want to miss out on updates unique to Snapchat and become a follower there too.

While Snapchat is one of, if not the most casual of all the platforms you could use, a huge 71% of all its users are between the age of 12 and 34, so keeping your posts fun and full of colour and action is important. Also, keep in mind that the need to remain professional and not to post anything that could be easily construed to mean something smutty or taken out of context.

I have seen the term “Keep it Disney” referred to as a way to remind a company of just how young followers can be on Snapchat and for that reason it is probably the best to have that etched into your psyche and that of your marketing teams.

As it’s all about engagement, run a competition in which you invite users to send you snaps of themselves using your product, visiting your store, recommending your products or even briefly explaining why they love your brand so much.

Set a date entries have to be in by and keep followers interested with regular updates and reach outs such as “Nice Snap KattyG1994 yours is one of our favourites” offer a prize itself that is as useful as you can. For example, if you run a confectionery business offer something small like a coupon to get 20% off their next purchase or a free box of chocolates.

10) Make use of Followers with Influence

Everywhere I look in social media there are people with large active followings who either stick to a particular niche or who are popular because of their outspoken views on certain topics and products. As a business you may find that some of those influencers are users of your products and if given the chance would love to say a thing or two about them in a more official capacity.

So why not make use of them and invite them (or at least a well chosen few) to take over your Snapchat for the morning or even a whole day, give them the reigns to show your company from the aspect of a follower. This method can be great for increasing your reach, as the influencer is certain to have informed his or her own followers about the upcoming takeover and because of that increased engagement is likely.

Keeping your stories and snaps fun is a must do!

Don't forget that if you do it right, Snapchat can provide you with positive results quickly. What I would advise you to do is experiment. Don't stick to just what works for others, try to stand out from the crowd, be unique, fun and engaging have conversations which make your followers regularly come back for more and send you snaps.

Have you marketed your business with Snapchat? What advice would you give to a business just starting out on this increasingly popular social platform?

Thank you for this. I have been wondering about Snapchat for awhile now. Will start today!

Thank you for the fremium!

It’s definitely worth taking a look at!

with that many users and ever increasing,its worth a shot.much thanks @ kim

Thanks for sharing this article about organic visitors. This is really a great article.