15 Things That Outrageously Successful People Do Every Day 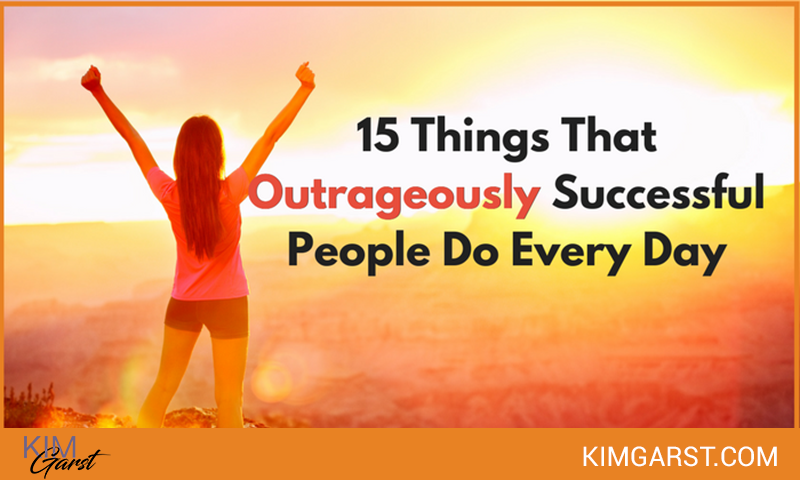 It’s easy to look at very successful people and feel jealous, or to assume they’re successful simply because of luck or chance.

But the truth is, there are certain things that many outrageously successful people tend to have in common – and these things have nothing to do with luck.

In fact, these habits are things you can replicate in your own life, giving YOU the best chance of success in life and business.

Following are 15 things outrageously successful people do every day!

1. They start their day with prayer or meditation

It’s well known that many successful individuals throughout history have started their day with prayer or quiet reflection. For instance, Oprah Winfrey has publically said she makes a point of praying every morning.

In the book O’Habits, author Warren Cassell cites Oprah as saying, “My prayer to God every morning on my knees is that the power of the universe should use my life as a vessel, or a vehicle, for its work.”

If you want to be successful, build in time for prayer, meditation, or simply some dedicated quiet time to contemplate your life, business and goals.

Both Elon Musk and Warren Buffett are known to be voracious readers. In fact, Buffett has said he spends up to 80% of his day reading!

Make a habit of reading a variety of genres in order to get new ideas, expand your knowledge and get a break from the tediousness of everyday life.

3. They get up early

Have you ever heard of a highly successful person who sleeps in until 10am? While I’m sure there are exceptions, outrageously successful people tend to make the most of their time by getting up early.

Business Insider reports that Michelle Obama, Jack Dorsey and Richard Branson are all early risers, getting up as early as 4:30.

Not an early bird? Give it a try for a week and see what happens!

4. They make exercise a priority

Author Tom Corley spent 5 years studying the daily habits of hundreds of rich people. In his book, Rich Habits, he reveals his findings, one of which is regular exercise.

He found that 76% of rich people spend 30 minutes (or more) each day doing aerobic exercise. Build regular exercise into your routine, even if that means getting up early to fit it in! (see # 3)

Tony Robbins has said, “Setting goals is the first step in turning the invisible into the visible.”

If you aim for some vague, unspecific idea of success, how will you ever know if you’ve reached it? Instead, set attainable goals (both short and long-term) and then document exactly how you’re going to reach them.

6. They get enough sleep

According to the National Sleep Foundation, the average adult needs 7-9 hours of sleep each night. Successful people know they need to make sleep a priority in order to have a clear mind and enough energy to get through the day.

How much time do you estimate you spend watching TV each day? According to Tom Corley, 2/3 of rich people watch less than an hour a day of TV per day.

Instead of ending your day by binge-watching Netflix, limit your screen-time and cultivate other end-of-day habits instead – like reading, having a cup of tea or spending time with your family.

Professional networking is vital for building connections and staying motivated.

According to Tom Corley, who you surround yourself with actually sets a cap on the level of success you’ll attain. He writes, “You are only as successful as those you frequently associate with.”

Make a point of surrounding yourself with like-minded individuals who you know will have a positive impact on your life and business.

9. They give back to others

Successful people know the value in helping those around them. In Tom Corley’s research, he found that 72% of rich people volunteer 5+ hours each month.

He writes, “Volunteering is a Rich Habit. It exposes you to other successful individuals and allows you to showcase your skill set. The relationships you develop volunteering open up doors and create opportunities for you and the members of your family.”

In her book, What The Most Successful People Do At Work, Laura Vanderkam writes, “Successful people know that hours, like capital, can be consciously allocated with the goal of creating riches – in the form of a changed world, life’s work – over time.”

Part of consciously allocating your time means creating a daily to-do list, and then sticking to it. This will help ensure you don’t waste your limited time and resources on tasks that won’t help you meet your daily goals.

Researchers have identified one trait they believe is more important than any other when it comes to success: the ability to delay gratification. What does this mean exactly? This means a willingness to do the tough stuff now knowing you won’t get your reward until later.

It might mean choosing the healthy meal, or determining to get up early, or doing your work now even though you’d rather watch TV. No one ever said success is easy!

Tim Ferriss, author of the 4-Hour Workweek (and hugely successful entrepreneur in his own right) is a great proponent of only checking email at set times throughout the day.

He recommends setting up auto-responders to let people know when you’ll be checking email, so they know when to expect a response.

Here’s a great blog post he wrote on the subject: How To Stop Checking Email on the Evenings and Weekends.

Extremely successful people need to say no by necessity. When you reach the point where you’re constantly being asked to give of your time and share your expertise, you’ll need to set boundaries simply so you reserve SOME time for yourself!

Start preparing for success now by carefully protecting your time and setting clear boundaries with those around you.

14. They carefully consider their failures

Bill Gates once said, “It’s fine to celebrate success but it is more important to heed the lessons of failure”. Everyone fails. It’s just part of life!

But what differentiates successful people is that they think about WHY they failed and what they can do differently next time.

15. They engage in positive self-talk

Apple founder Steve Jobs reportedly gave himself a little pep talk every morning, asking himself, “If today was the last day of my life, would I be happy with what I’m about to do today?”.

If you want to make sure you start your day in the right frame of mind, take a few moments each morning to check in with yourself and make sure you’re happy with the path you’re on.

Hopefully this post has shown you that success isn’t a matter of chance or luck, but of practicing the habits of other successful entrepreneurs. Success IS within your grasp!

Which of the habits above are you going to incorporate into your daily routine? Share below!

Great post! Nice to know that I already do some of the things listed. Just need to be more consistent and add more.

What a great post! I have been trying to market but this makes me see, I have so much further to go! Thank you! I need to print this out and add it to a daily plan!

I’m going to start reading more. I buy books but with juggling business and family, I don’t read as often as I want.

Kim, I especially agree with number 1 – meditation and prayer definitely set the stage for your day. All of the ones you listed are great for anyone to follow and do. I like your content. Joyce Manuel-Wolfe

Look forward to meeting you in person, Bob!

I LOVE reading! Always something new to pick up even on the 2nd read of some of my faves :-).