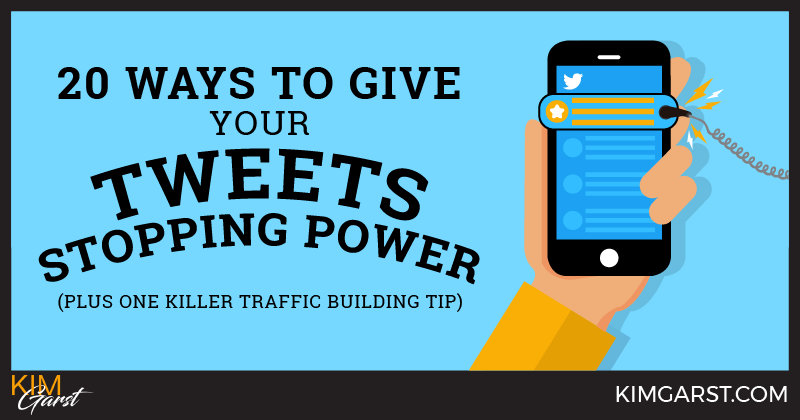 Twitter has been taking it on the chin in the media, but its prominence remains. Though growth has slowed, Twitter’s 320-million current active users represent an all-time high.

Obviously, as a user, you want people to stop and read your tweets. It’s no slam dunk. Edison Research says the average user has 208 followers—a modest number compared to most brands. Still, if each follower were to tweet twice a day, over 400 tweets would populate the average feed each day.

Twitter users must concede a good portion of the tweets they compose are bound to go unnoticed.

Yes, you can increase your reach by buying advertising on Twitter. And it’s not likely you’ll need to stand in a long line. Only 18% of social media marketers use Twitter ads compared to 86% for Facebook, according to the Social Media Marketing Industry Report 2016 by Social Media Examiner.

Do your tweets drive traffic?

I have 20 ideas to help you create tweets that get noticed, but first, I want to share a a simple way to increase traffic to your website via tweeting with Start a Fire. The free service enables you to easily increase the reach of your content as you share links. 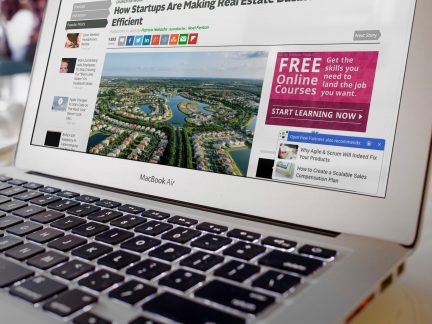 The Start a Fire service gives you a branded badge that appears on the bottom of the page and includes additional content you recommend. Reshared links deliver your recommendations to new audiences and encourages readers to click-through to your site. 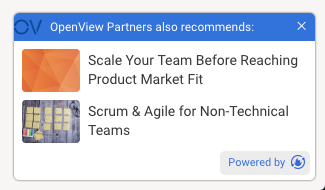 Here’s an example of a Start a Fire badge used by OpenView Partners.

I read 7 of the 10 most followed Twitter accounts belong to singers. Maybe you should start singing? Of course, you’ll be taking on the likes of Katy Perry, Justin Bieber and Taylor Swift, so you may not find an audience.

1. Include emojis and symbols

Those little icons we once called “smileys” have come a long way. Today, an amazing array of emojis and symbols appear in tweets and people seem to love them. Try including non-text characters to make your message stand out.  From your smartphone, it’s easy to grab emojis straight from your keyboard. On your computer, you can use a Chrome extension or copy and paste from vast libraries of Twitter symbols like this one.

Tennis mega-star Roger Federer likes to speak in emoji on Twitter as he’s done in the tweet above where he celebrates Switzerland’s appearance at the Olympic Games.

Your tweets are only seen by your followers, if at all. However, when you use a hashtag followed by a word (or words smushed together as a phrase) they can potentially be seen by any user.

By including the hashtag symbol (#), you categorize your tweets, which makes it appear when a user searches the term. Clicking a hashtagged word shows other Tweets that include the same hashtag. 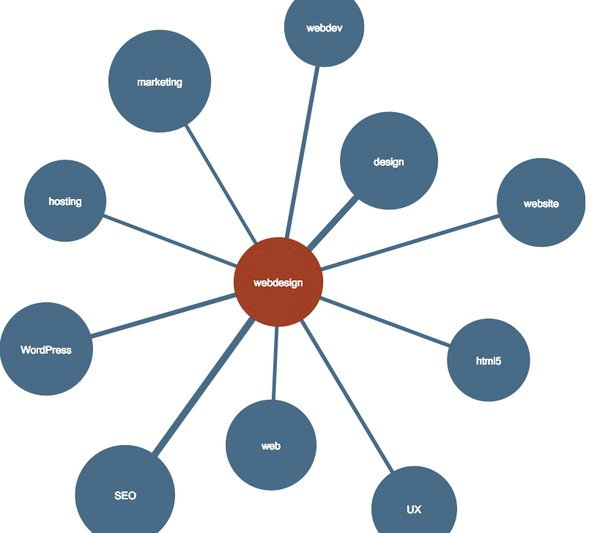 Checkout the Hashtagify site to conduct all kinds of hashtag research including an automatic mind-mapping function that generates related ideas.

3. Call @ttention with a mention

Want someone specific to see your tweet? Mention them by including their username preceded by the @ symbol.

Want to get the attention of a group of people at once? The trick here is to include an image in your tweet. Twitter presents a prompt that reads, “Who’s in this photo?” You can tag your photo (or any image) with up to 10 users without affecting your character count.

Twitter Polls were introduced in 2015, but didn’t catch on the way I expected it would. I use Twitter Polls somewhat often and find it to be a great tactic for engaging my followers.

It’s easy enough to do. Simply click the “Add poll” icon beneath the tweet box, enter up to four choices, and select the length of time you want your poll to run (up to seven days).

It appears my followers are aware of the Twitter Polls feature. It’s underutilized though and therefore represents an opportunity for you.

You may not always have time to add images to your tweets, but you’re likely to be rewarded for doing so. Check out this data: 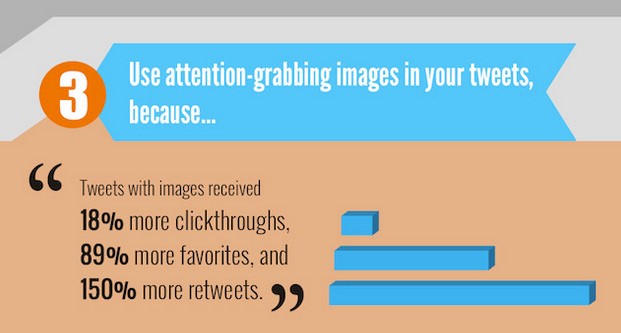 Because the advantages of adding images to your tweets are now understood by the masses, your next challenge becomes executing the tactic adroitly. Here’s one of my tweet with an image: 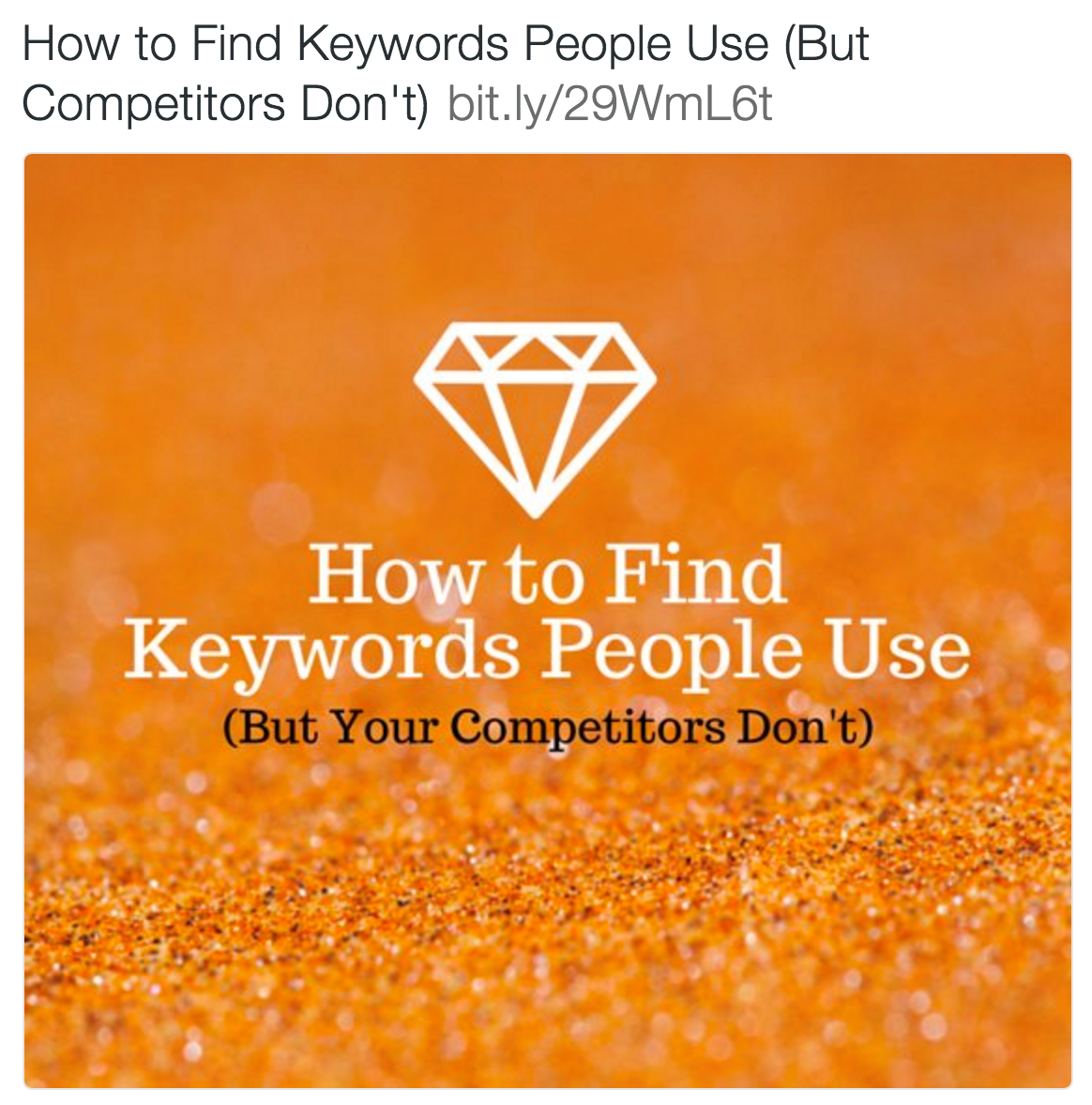 Some of the tricks I like to use include the use of:

I’m also fond of including my logo, URL or both, for branding purposes (though I didn’t do so in the example above). I create multiple images for all my blog posts and feature them in my tweets. Sometimes I also create original images for use on Twitter for my guest posts—or even when sharing a piece of content that should have had a cool image, but didn’t.

As for image creation tools, you can’t beat Canva. However, the web offers a huge array of free, cheap and easy DIY graphic design tools you can add to your trick bag.

In addition to the “calling attention with a mention” technique, have some of your tweets feature photos of people. Faces have immense pulling power. It’s as simple as that. 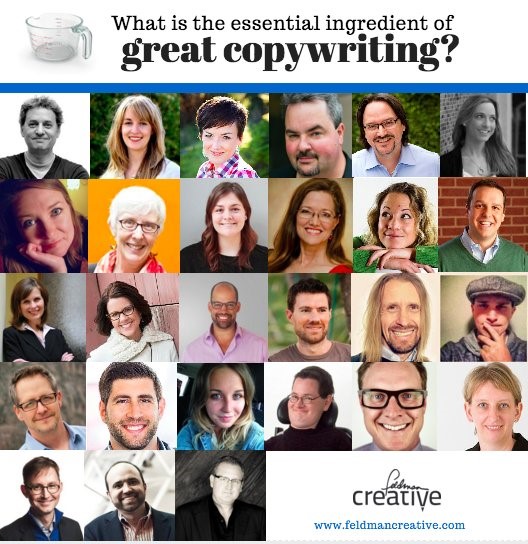 I post this image often when I promote my roundup post featuring copywriting secrets from 27 pros. There are 54 eyeballs pointed at you. You’re scanning the collage right now looking for a face you recognize, aren’t you?

While we’re talking about images and people shots, I want to encourage you to feature yourself in your tweets now and then—especially if you’re hiding behind a logo in your profile picture.

In addition to increasing stopping power, your photo will help make a more personal connection and build trust with your followers. I’m not saying you shouldn’t shave, smile, or fix-up your hair, but don’t be overly shy or vain. Toss a candid or selfie on Twitter.

Don’t let the 140-character limit for tweets dissuade you from posting a longer quote. Instead, feature the quote in an image. It’s easy enough to do with many great online tools (one, called “Pablo,” is even built into Buffer now). Quotes as images will attract more eyeballs and get shared more too.

To use them, you have to want it a bit. Technical shenanigans are required. The good news is Twitter cards can be permanently integrated into your content management system. Twitter’s CMS Integration Guide walks you through the process (somewhat painlessly).

There are five varieties of Twitter cards. Above is an example of the “Summary Card,” which is the most commonly used. The card displays a square image, title, and snippet from your post or page as well as a link.

Asking questions is an effective way to pull readers in. Come up with relevant questions about your niche. When you get responses, make sure to follow-up with those who answer you. Show them you’re listening and care.

You may also want to highlight certain answers by retweeting them with a response to keep the conversion alive and inspire even more interaction. 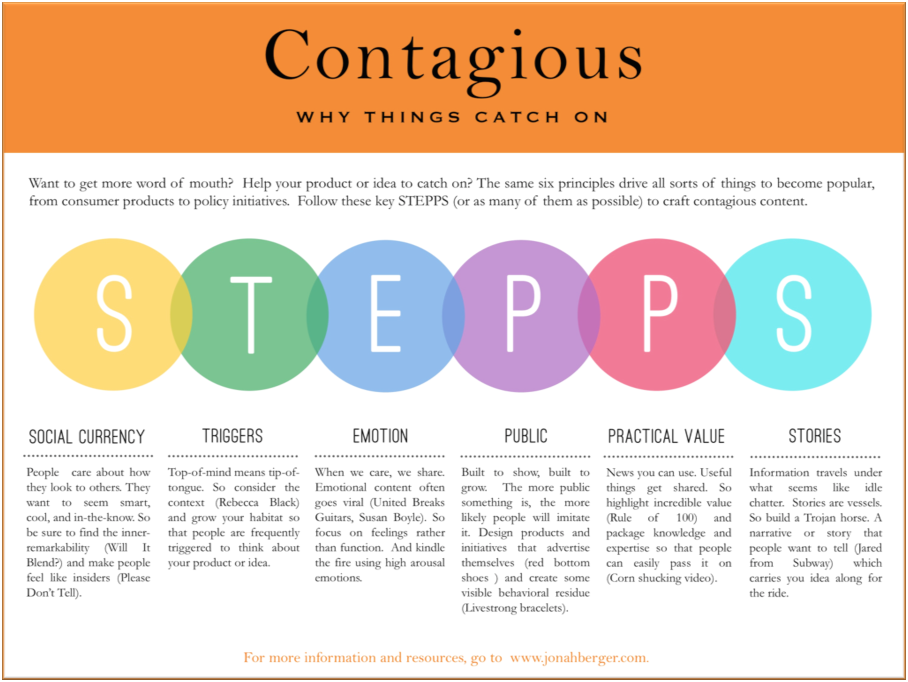 Jonah Berger, a marketing professor at Wharton, conducted a decade of research for his book, Contagious: Why Things Catch On. Berger identified six principles that cause people to talk about and share an idea.

He created the acronym STEPPS to spell them out. “E” is for emotion. Berger explains, when we care, we share. The more readers are physiologically aroused, the more likely they’ll pass something on.

Want to assess the emotional value of what you’ll tweet? Check out the emotional marketing value headline analyzer from Advanced Marketing Institute.

12. Add an afterthought (in parentheses)

I offer this subtle trick when I teach headline writing, but found it applies nicely to tweeting too. Include something in parentheses [or brackets] in your tweet. It adds a little magical magnetism. You can do so in mid-tweet or after your thought’s complete.

If your tweet offers a link to something special, say so, like so: [Infographic] or [Video] or [Interview].

Make a point to thank your fellow tweeters who have helped promote your content or contributed to it. Doing so is as simple as tweeting to that person with a mention. You’ll not only create a tweet that will get read, you’ll be nurturing a relationship.

Lookie here. Christopher appreciates my guest post and the blog it appears on. He not only got my attention; he got a new follower. Turns out he lives nearby. Who knows, maybe I got a new drinking buddy?

As I mentioned some 1,500 words ago, tweets fly by your followers. Though they exist long after they’re created, essentially, they disappear.

If you want your tweets to be seen (and in most cases, the content you’re tweeting about), be sure to tweet multiple times—and at different times of the day. Of course, it’s easy to tweet the same thing, but you’re more likely to be rewarded for trying different copy and images.

Many social media tools make it easy to schedule tweets in advance, including Hootsuite, Buffer, Sprout Social and Edgar.

Most tweets get close to consuming the 140-characters allotment. You can make your tweet stand out in a busy stream simply by posting a short one.

Twitter’s home to a number of live-recorded events and interactive social platforms. You can “liven” your Twitter feed with:

• Periscope—Live stream on Periscope and your video appears in Twitter, as does the invitation to join it and shares with mentions.
• Webinars—If you host or are involved in a webinar, give it a hashtag, announce it and encourage sharing.
• Anchor—Anchor is a cool new app that delivers “Radio by the people.” Audio streams are created and appear on Twitter.
• Live Twitter chats—The granddaddy of live Twitter interaction is the Twitter chat. Checkout HubSpot’s guide to hosting successful Twitter chats.

By now, you’ve heard of Vine (which Twitter owns), the odd app that lands somewhere between image, GIF and video sharing. It actually is video sharing, but your video is limited to six seconds.

Try it. Your video will loop on Twitter and attract attention.

One day I found a video in my Twitter stream from a user who simply wanted to thank me for following him. I didn’t know you could do that. And even now that you can, very few people actually do.

The third option is the most interesting one and a sure way to increase the stopping power of your tweet.

Twitter’s a vital part of your social media mix, right? You made it to bottom of long list of tips. Now try them.

Pick a few of the techniques here and put them to work for a few weeks. Then look at the engagement numbers Twitter provides you. Getting more likes, retweets, and clicks is a sure sign you’ve improved your stopping power.

Do you know a great way to call attention to your tweets? We’d love it if you shared your ideas.