Get more eyeballs on your “stuff” with 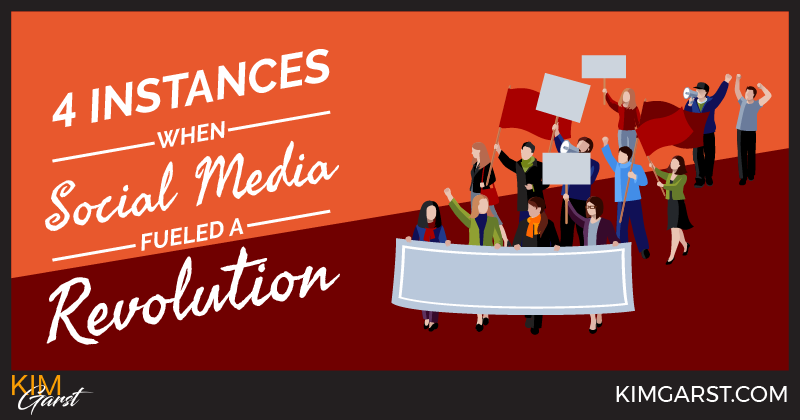 Our generation's version of “the shot heard around the world” might come in the form of “the Tweet retweeted around the world” as social media becomes an increasingly important platform for global communication. Aside from following your favorite brands and celebrities, social media can be a powerful way to distribute information to loosely affiliated groups of people with a common interest.

The speed at which information is spread through social media is the main reason why platforms such as Facebook or Twitter have had increasingly large roles in civil society, even fueling revolution. Check out the powerful ways social media has been used to create change around the world.

Social media helps unite people with a common cause, and in the Libyan revolution, it was an important platform used to distribute information and firsthand accounts of what was going on within the country, for both people in and out of the country. Because official media outlets such as TV and print were controlled by the state, social media became the reliable source of information for revolutionaries.

Videos on Youtube were also a critical tool in showing what was going on in the streets, as people were able to gain a more detailed perspective of what was happening. As a result, social media and mobile tools, such as tablets and cellphones, were crucial in the revolution.

In the Spring of 2011, the world was thrown into the chaos of what became known as the Arab Spring through an online frenzy of activity. More than 3 million tweets on Twitter, hundreds of hours of Youtube video, and countless posts on Facebook and blogs told stories of the revolution from citizens who needed to get their voices heard.

While the revolution began in Egypt, Twitter was critical in the spreading of revolutionary messages across northern Africa and across the Middle East. Government attempts to cut off cellphone and Internet service only fueled the fire, and increased awareness of the citizens' plight even further.

On the heels of the Arab Spring came the Occupy Wall Street movement, where the use of mobile devices and smartphones were critical in spreading time-sensitive information to an online community in support of the movements. The application of social media tools and mobile devices quickly became the winning formula for supporting the movement's communication strategy, in the loosest sense of the word.

These strategies included impromptu meeting times and locations, and spreading awareness of what was happening during those organized meetings. Without the power of the web and of social media, it would have been impossible to gather so many people in one area so quickly.

In Ukraine, protesters line the streets in order to create social change. Like other movements, this one relies on social media as a strategic tool for communication, using platforms such as Twitter and Facebook to organize thousands of like-minded individuals.

In the particular case of Ukraine, the importance of social media tools in the protests has led to an increase of usage in Twitter, changing the social media landscape of the country. Twitter's features, such as hashtags, are especially important in digging deeper into the conversation and following the latest news from the frontlines.

As technology becomes more integrated into our daily lives, the reliance on social media as a means of communication has also drastically increased. From mobile devices in Libya, to local satellite internet service in Virginia, world changing events are immediately spread over the web across the globe. To see what's happening or trending all over the world, you really only need to look at what's popular on social media; platforms such as Twitter feature a “Trends” column where the most talked about topics are gathered together in the form of phrases or hashtags. As a result, tools such as Twitter and mobile devices have been essential in the spread of information, and in the fueling of a revolution.

1 thought on “4 Instances When Social Media Fueled a Revolution”