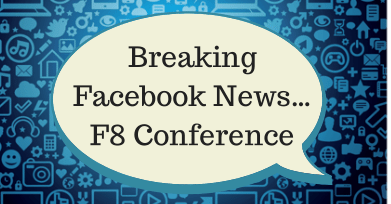 My friends over at Heyo.com summed what's coming down the pipe with Facebook very well…check out their latest article and let me know what you think?

Facebook is focusing on making a stable mobile platform and putting people first.

At yesterday’s F8 conference, CEO Mark Zuckerberg started off by saying that “this is going to be a different kind of F8,” and by different he meant no major product releases or changes in direction. Instead, he emphasized that they were now focusing on building a stable mobile platform that would allow developers to build, grow, and monetize their apps.

Zuckerberg also emphasized that Facebook would be shifting to a “people first” mentality, where they would be addressing the privacy concerns of its users and giving them more power and control over what data they share.

Facebook Product Management Director Deb Liu took the stage at F8 to announce the official launch of Audience Network. With over 1 million advertisers using Facebook, mobile making up 59% of the companies revenue, and over 50% of Facebook users only using the Facebook mobile app, many saw this coming.

The tool will allow advertisers to easily place ads into third-party apps and with a streamlined experience.

Zuckerberg said: “We’ve done a lot of work already in the past years to help you build and grow your apps. This is really the first time that we are going to help you monetize on mobile.”

If you’re a small business looking for a way to use Facebook to drive sales without spending on advertising, click here to sign up, and publish a mobile optimized campaign for your Facebook page.

For the first time, Facebook is now introducing a 2-year Core API Stability guarantee which will give confidence to developers who need a stable platform to build on. This will include Login and Sharing features.

This means that even should Facebook completely ditch a certain core feature, they would continue to provide support for that feature for 2 years past the date of whatever change made it obsolete.

This comes as a relief to developers who are hesitant to invest time and money on Facebook features when Facebook is known for moving fast and breaking things in the process. Developers can now proceed with confidence.

Now, every API that Facebook launches will be versioned – giving developers some much needed assurance and flexibility to decide which API version they would like to build against.

Facebook has always tried to move as fast as possible when it comes to fixing bugs but they wanted to come out and make a firm commitment to excellence by stating that they will ensure that they fix all major bugs within 48 hours.

Facebook knows that users are afraid of the big blue Log In button and they are listening to that feedback. Zuckerberg revealed that users would now have much more control over what information is shared when they choose to log in with Facebook.

They would be presented with a check list that includes things like Public Profile, Friends List, Email Address, etc.. and would be able to choose which of these permissions to give.

The user is signing in on their own terms in what is essentially the same amount of time they took to log in before.

This handing over of reigns to the user in a seamless experience is intended to build more trust with the user which means more engagement. It’s a win/win for the user and the developer.

Many users have always wanted to try an app out first without having to go through the process of setting up a new account and revealing their identity.

This feature allows users to do just that, log into apps and try them out anonymously. Some people just aren’t ready to take the full leap at first, and because of that they don’t install an app. This feature hopes to change that by first engaging users before forcing them to engage back.

Skeptical or not, this is definitely a step in the right direction to building trust and fostering more engagement with users.

Back on the developer side of things, some new tools were revealed that will make life much easier for them. Applinks is one of those tools and it allows developers to link to other apps with just a few lines of code.

Essentially this means that apps will no longer have to be treated like stand alone silos with users having to navigate out of them to find other apps. With just a few lines of code, developers can insert links to other apps in their own, allowing for users to switch back an forth at will.

For instance you could be in your Gmail App but flip over to Soundcloud to change a song and flip right back via a convenient “return to” banner at the top of your screen – all without having to open up a browser or new window to complete the action. This seamless lateral movement for users combined with the ease with which developers can now implement it makes it a win/win for everybody.

Send to Mobile is a feature that allows desk top apps to easily send a reminder to the user’s device and prompt them to install it there. So instead of the user having to first remember the app, then second, go on a quest in the Play store to find an app, they can simply tap it in their reminders to have it installed.

The Mobile Like Button is a can’t miss, light weight version of the old Like button we’ve all come to know and love. This optimized Like button makes it easier than ever for the mobile user to engage with mobile content. User familiarity with the Like button along with the growing user base on mobile made this addition a no-brainer.

The Message Dialog allows the mobile user to easily be very selective about who they are sharing content with. In essence, the message dialog takes on the role of a private share button, allowing you to share content privately with whomever you want to message.

Zuckerberg closed his keynote address by reiterating that this year wasn’t about “some new shiny direction or product [but] about listening to you…and building a culture of loving the people we serve.”

To top it off, Zuckerberg announced that Facebook would now be stepping up to Google’s and Apple’s level by having an annual conference. Next  year’s conference is scheduled for March 25 in San Francisco’s Fort Mason.

10. 24% of Mobile Traffic to News and Entertainment Sites Comes from Facebook

In line with the f8 conference, Quantcast revealed additional data regarding the mobile consumer landscape by sharing that 24% of all mobile traffic to news and entertainment sites is coming from Facebook.

Additionally, Facebook’s in-app browser is now the leading third-party browser for iOS. Quantcast shared in a blog post that in-app browsing is responsible for 24% of iOS page views. The Facebook app was responsible for one-half of that figure, or 12 percent of all iOS browsing. That’s three times the page views of the next-largest browser, Chrome for iOS.

If you’re wanting to take advantage of Facebook’s mobile dominance by driving more mobile engagement, email captures, and sales, click here to sign up, and we’ll show you how to launch a mobile campaign that converts at 10% or higher.

Tell us what you think and we may quote you in a future article:

Tell us in the comments below, do you think Facebook will continue to grow its dominance of the mobile ecosystem?

Super interesting, especially the ‘anonymous log-in’. That’s going to be helpful. Glad they’ve put a 48 time frame on for fixing bugs too, that’s great. Thanks for the update!

Carmen,
Facebook always has something for us to look forward too, and I am sure there is more to come. Boom Care Squad – Aida

Zaldi,
Sounds like you are excited about some of the new features. It will be great to see what kind of new features are released in the future – Boom Care Squad – Aida