How to Act Like a Schoolyard Bully Using Social Media

One of the things that bugs me the most, online or in person, is a bully.  I get worked up when I see someone try to use their power or position to stomp on the dreams of someone else.

So you can imagine my heartache and righteous anger when a mom who is a friend of mine and in my online coaching group told me about her daughter's recent experience selling Girl Scout cookies.

Let me give you a little background.  Most of us are familiar with the Girl Scout cookie program – we've either had someone knock on our door, or set up a booth outside our favorite grocery store, or seen the familiar order sheet come around each spring in our place of employment.

In recent years, the Girl Scouts have introduced a noble addition to the program called "I Care," an initiative to allow people to donate boxes of cookies to send overseas to our men and women in the armed forces – one of the most recognizable forms of Americana for someone stationed overseas, especially in a war zone.

Donations being what they are, especially these days, not a lot of people in neighborhoods are donating to the I Care program these days, though.

In a community in California, 11-year old Emma Vermaak noticed that people weren't donating to the I Care program, and – with a heart of love for our troops, wanted to see if she might change that.

As I mentioned, her mom is involved with my You Can Do Social Media community, and helped her daughter market the I Care initiative online, including creating a PayPal button so in this current world of global online "neighborhoods," people who were far away might be able to send funds to purchase cookies for the troops more easily.

Emma's efforts went big online, thanks to the power of social media, and she started getting some pretty high profile Tweets – including one from the Girl Scouts Twitter account, giving her high praise for her initiative in using social media to promote the I Care program.

As the tweet said, Girl Scouts couldn't be prouder of Emma's work.

Unfortunately, one of the moms in Emma's troop couldn't be more jealous, either.  She complained to the local council about Emma collecting funds via PayPal in support of this effort, and shortly thereafter, the message from Girl Scouts started to change.  Emma and her mom were told they couldn't collect funds via PayPal and were given 2 hours to remove this means of payment from their website, which they did.

Then the Girl Scouts kept sending Emma tweets that were condescending and patronizing, honestly.  It's not a way that professionals would speak to others in public, much less a child. 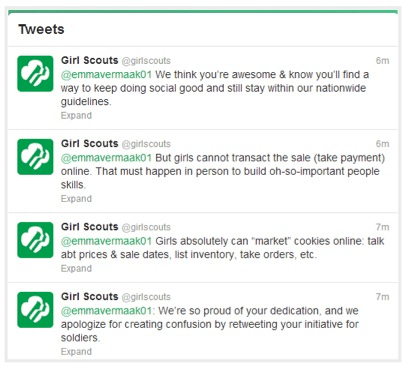 A spokesman for Girl Scouts cites national rules in the interest of "safety" and building "real life experiences."

If that's their goal, you'd think that an alternative to sending girls door to door would be welcomed with open arms. One could argue that is not safe!  Not to mention that they'd applaud a girl for using the most modern methods of marketing to promote the cookie sale, expanding her horizons and preparing herself not just for the future but for the reality of marketing in 2013 and beyond.

Now to be fair – the Girl Scouts has an Internet Safety Pledge that includes a statement that girls won't use the Internet to collect money for Girl Scout products.

Emma was using the Internet to collect donations to send cookies to the troops, in addition to selling the cookies through the traditional means – door to door and booth sales.

Interestingly, Emma was pursued with a whole lot of negativity, while parents from the same troop who take cookie order forms to work on behalf of their daughters (also a violation of Girl Scout policy) are largely ignored by the organization.

One of the tweets sent by Girl Scouts also makes reference to needing to be engaging in person in order to build "oh-so-important people skills."

This is one of many points of this whole thing that has my blood boiling.  If Girl Scouts doesn't understand that social media is nothing more than a different way to exercise people skills, then they are clearly missing the point of social media and doing it all wrong.  And their use of Twitter to scold Emma publicly sure makes this seem likely, doesn't it?

I did some reading about Girl Scout cookie history; it's a history that shows the Girl Scout organization changing with the times and includes stories of how individual girls showed remarkable creativity and innovation to best meet the needs of their fellow human beings.

In the early 1900s, cookies were made by girls and their mothers, packaged in wax paper bags sealed with a sticker, and sold door to door.

But get this – in 1932, in Philadelphia, one girl wanted to bake cookies for a specific cause – children's nurseries, so her parents arranged for her to use the ovens of the Philadelphia Gas and Electric Company, and left over cookies not given to the nurseries were sold right there from the storefront windows of PGE.

Emma's story touched my heart because of her pure desire to something noble for our troops in harms way and her determination and spirit to find an innovative way to do it with excellence. The part where she used social media to blow sales records out of the water doesn't hurt either, right?

True to her spirit, she hasn't let a few negative tweets get her down.  Emma has a new website, Treats to Troops through which she is gathering donations for care packages for deployed troops.  I'm proud to be able to share her website with you – if there's a chance you'd consider donating to such a worthy cause, I know she'd be delighted to share your generosity with our deployed women and men.

Do you have any words of encouragement for Emma?  Feel free to comment below; I'll pass them along!

UPDATE:  As this blog post has gone to "press," I am sorry to have to let you know that Emma has been kicked out of her Girl Scout troop.  Her mom received a phone call from the mom whose complaint about Emma's success started this whole thing, informing her that Emma was officially kicked out and not welcome back for any further activities with her troop.  While Emma has an amazingly positive attitude (and hey, she has her own budding charitable organization that she's running, so her time is increasingly valuable these days), I know that she'd love to know of the support of our international community.  It is a downright shame that, at 11, she has been exposed to such politics. Do you have any words of support for Emma and her mom?  Please feel free to include them below and I'll make sure she receives them.

This is outrageous.  Emma is exhibiting initiative, entrepreneurial-skills, and technological-saavy.

I am totally appalled at how the Girl Scouts have handled this situation. Not a good representation of their brand for sure.

Agree wholeheartedly with you, Brett!

I offer my support. As a member of the armed forces I think this is a brilliant initiative that should be further adopted.  Small people with small minds should not prevent initiative and one of the best things about the forces is that they teach you to "think outside the box".

Thank you for YOUR service Simon!

Exactly! Thanks for stopping by Matt!