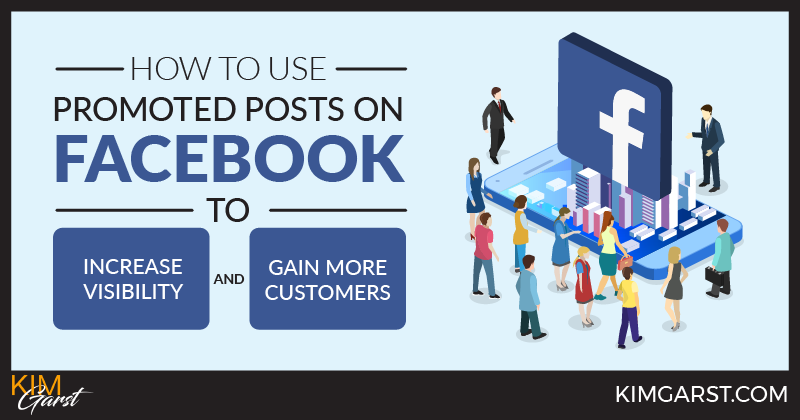 I have a love/hate relationship sometimes with Facebook! It is an amazing tool that connects 1 BILLION plus people in ways that were never possible before. It gives a whole new meaning to the saying “it's a small world”. We now have the ability to connect with people that we would never, in the ordinary course of life, connect with! Bottom line…it's a huge marketplace and, as business owners, we can't afford to simply write it off.

I am, like many others, a little frustrated with them and decided to do something about it! In fact, I built, and am offering a super-affordable (like $9!) mini-course called Promoted Posts Domination to help even the playing field on your behalf and help you triple+ your Facebook engagement. More on that a little later…

Okay, the problem…you already know that your Facebook posts don’t get the visibility and reach they once did. Whereas once upon a time you could post an update to your page and reach every one of your fans, paying for extended reach has become a way to reach more of our fan base.

And according to Ad Age, Facebook has acknowledged that organic reach is only going to continue to drop:

“We expect organic distribution of an individual page's posts to gradually decline over time as we continually work to make sure people have a meaningful experience on the site.”

Fortunately, Facebook does offer ways to increase your visibility, although these options will cost you. Business owners have the option to advertise their page or business through Facebook ads, as well as the option to increase the reach of updates through the use of promoted posts (I won’t cover sponsored stories here as, come April 2014, they will be no more).

For just a few dollars, you can extend the reach of your posts significantly, increasing engagement with your current fans, and potentially gaining new ‘likes’ when their friends see the post.

So, why exactly would you use promoted posts? What types of posts are worthwhile promoting? Let’s take a look.

What Types of Posts Should You Promote?

Generally speaking, promoted posts should be reserved for ‘money’ posts: posts that have a strong call to action, and which are likely to result in some kind of measurable payoff.

Posts that many marketers pay to have promoted include:

Jay Behr, author of bestselling book Youtility, gives some great suggestions regarding when to ‘stir’ (aka promote) a Facebook post. 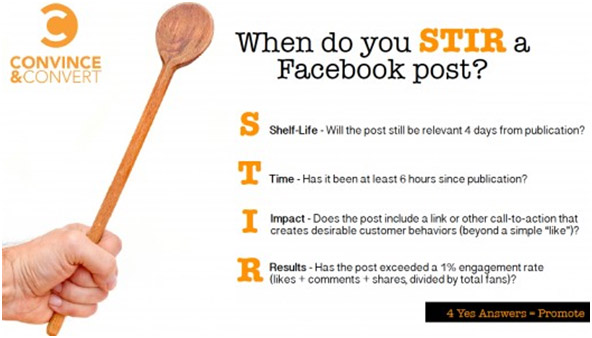 Image courtesy of Jay Behr at Convince and Convert

S – Shelf-Life. It may take some time for your post to get promoted to your audience, so will the post still be relevant and timely even in a few days?

T – Time. Give your post some time to accumulate organic reach before you pay for reach. Jay suggests waiting at least 6 hours to make sure your post has achieved most of its organic views, and only then to promote it.

I – Impact. What is the intended impact of your post? If you’re going to be paying for it, make sure you have included a call to action that will help achieve your intended goal.

R – Results. What kind of organic results are you getting with your post? Try to promote posts that are going to give you results: a 1% engagement rate is a good rule of thumb when deciding which posts will give you the best bang for your buck.

Keep in mind that one of the benefits of promoting a post – besides obviously getting in front of more eyes – is that your post accumulates likes, shares and comments each time you promote it. This increases your social credibility and thereby increases the chances of someone saying, ‘Wow, 1000 others like this, maybe I will too!’.

So back to my mini-course Promoted Posts Domination. I have been using Facebook Promoted Posts ultra-effectively for a long time now. I know the “in's and out's” and  the tips and tricks to get the maximum return on your investment.

I put together a mini-course (5 video-based lessons that you can do in under an hour) called Promoted Posts Domination and purposefully made it affordable to EVERYONE by pricing it at only $9 (that's a cheeseburger and fries!).

That means if you are serious at all about using Facebook Promoted Posts you have no excuse for not getting my course. I am going to save you $9 on your very first post and make your money back for you dozens of times over. Simply click the graphic below and whatch my short video on what you get in the course. 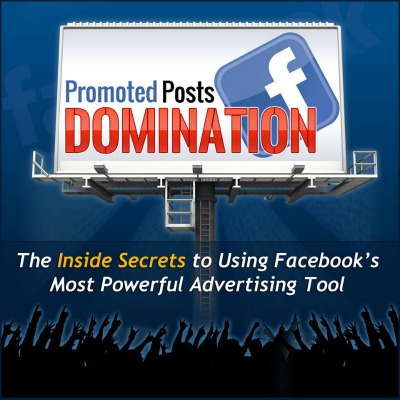 Really good tips, especially the suggestion to wait at least 6 hours before promoting a post. I’ve been doing mine as I post. Makes perfect sense. Thank you.

Kara, shoot us an email at info@boomsocial.net and we’ll fix you up!

Love the “STIR” mnemonic. Had not thought about the 6 hour wait. Thanks!

Thanks for dropping in, Melinda!