8 LinkedIn Strategies That Are Making You Look Desperate

Probably more than ever before, LinkedIn holds huge potential for marketers and business owners.

BUT…it also has the potential to waste your time, hurt your reputation, and quite frankly – make you look desperate. 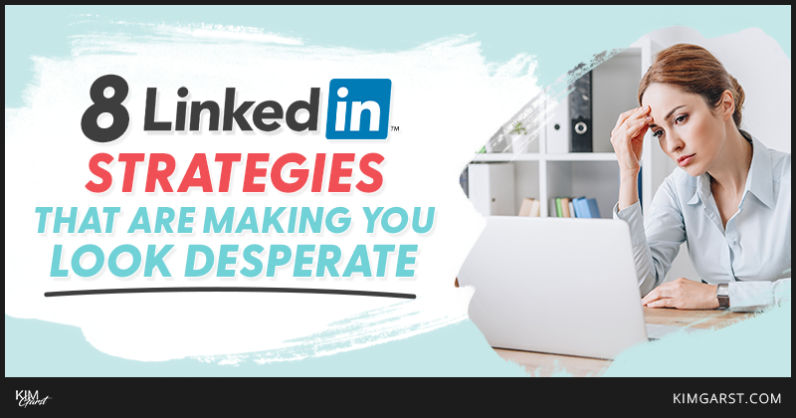 That’s why I recently met with Melonie Dodaro, LinkedIn expert and author of the book, LinkedIn Unlocked. She’s also CEO of Top Dog Social Media, a company that specializes in B2B social selling.

I wanted to get Melonie’s take on what LinkedIn strategies we might be using that are ineffective or even harmful…as well as what she recommends doing instead.

In this post, we’ll look at 8 strategies you may be using on LinkedIn that might actually be making you look desperate!

But before we jump into these strategies, I think it’s important to address the elephant in the room…

Why All the Sudden Interest in LinkedIn?

If you’re like most business owners, you probably joined LinkedIn a long time ago. However, in recent years, you may have noticed other platforms – like Facebook, Instagram and even TikTok – getting a lot more attention.

This is when Melonie saw interest in LinkedIn really pick up, due in large part to the Facebook and Cambridge Analytica scandal. Since then, it seems many people have started to lose interest in Facebook, and have started heading over to LinkedIn instead.

The problem, according to Melonie, is that for years, LinkedIn has kind of been that “boring social media platform”. It was all business, so people who really enjoyed engaging on Facebook and Twitter just didn’t find as much enjoyment in using LinkedIn.

But while it may not be as exciting as other platforms, that’s okay, according to Melonie…as long as it’s profitable: “We all have things to do in our life and in our business that we don’t want to do. We have to do laundry, we have to cook, we have to do various things in our business. There’s always going to be boring aspects of it, but if that boring is producing results, then it’s not really that boring to me”.

In spite of LinkedIn traditionally being known as the “boring” social networking site, the tides are definitely turning. For people who know what to do on the platform – as well as what NOT to do – LinkedIn can be extremely rewarding and very UN-boring!

8 Strategies that Are Making You Look Desperate on LinkedIn

Feel like you just aren’t getting the results you want on Linked? Following are 8 LinkedIn strategies that could be working against you.

According to Melonie, there have historically been 3 types of users on LinkedIn that don’t get results.

First, we have the salespeople. You connect with them, and immediately they give you the sales pitch. You probably see these people all the time on LinkedIn.

Then you have the “ghosts”, the people who set up a profile ages ago, but did nothing with it. Maybe they accepted connection requests and sent requests to people here and there, but they never had conversations with anybody.

The third type of users are people who love using social media – but who do all their engaging and networking online. Online networking is great, but according to Melonie, your conversations can’t all be happening behind a screen: “Social butterflies are spending all their time online, never moving those conversations or those relationships forward”.

For me personally, prior to the past few months, I would say I was definitely the “ghost”. But I’ve gone from that to actually getting business through the platform…simply because I’m active there, am having conversations, and am moving those conversations offline as quickly as possible.

The first strategy talked about the 3 types of users who don’t get results on LinkedIn.

But fortunately, there’s a 4th type of user who does: those who are using LinkedIn strategically.

These people create a compelling presence, reach out to targeted prospects, and move their conversations offline.

According to Melonie, the goal is to get the maximum results while spending the least amount of time on the platform. And the way to do this? “At the end of the day, it’s about direct outreach. So finding those people that could be an ideal prospect for you, connecting with them, and having conversations without being sales-pitchy”.

Again, it’s also about moving those conversations offline. Many people think they need to send a sales pitch message, but that’s not the case at all. A good rule of thumb, according to Melonie, is to think about how you would act in real life…and then act that way on LinkedIn. You wouldn’t pitch someone a product right after meeting them in real life, so don’t do it on LinkedIn!

Before you send anything, evaluate it through Wii-FM Filter – the “What’s in it for me” filter. People don’t care about you, they care about how you can help them. If we focus on that perspective, we’re going to create far more interest than if we’re constantly just talking about ourselves!

People don’t care about you, they care about how you can help them. If we focus on that perspective, we’re going to create far more interest than if we’re constantly just talking about ourselves!Click To Tweet

#3: You’re Using LinkedIn the Same Way You Use Other Platforms. 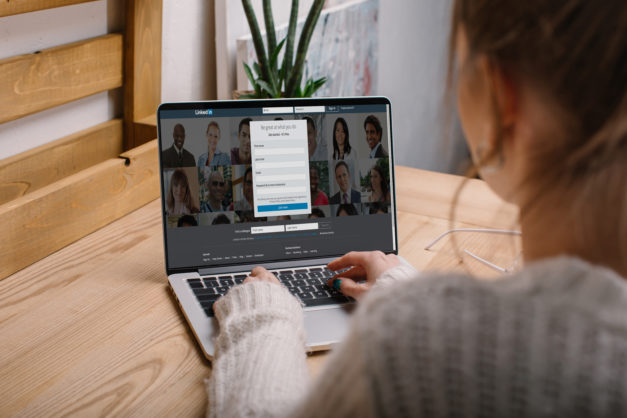 If you’ve been active on other platforms for a while, it’s understandable that you’d want to use LinkedIn in the same way: sharing things that happened to you throughout the day, talking about the upcoming election, or posting funny memes.

In reality, however, LinkedIn has quite a different vibe, and you need to treat it differently.

For instance, on LinkedIn it’s important to stay away from polarizing topics, and to keep personal posts to an absolute minimum. And if you do want to share something personal? Figure out how to spin it from a business perspective.

On LinkedIn it’s important to stay away from polarizing topics, and to keep personal posts to an absolute minimum. And if you do want to share something personal? Figure out how to spin it from a business perspective.Click To Tweet

Need more tips for using LinkedIn for your business? Check out my post, How to Effectively Use LinkedIn for Business.

I’m sure you already know how important hashtags are as part of your social media strategy.

However, Melonie sees a lot of people overusing hashtags on LinkedIn. In Melonie’s view, when you’re hashtagging every word, it serves no purpose and just looks spammy.

Instead, she recommends doing things with a goal and an objective…not just because you can: “When you share something on LinkedIn, share it with a purpose and a goal as well. The goal might be [that] you want to drive traffic to a new article you just created. It might be that you want to have a conversation around this topic, and [want] people to engage with it. If you have a specific goal for doing what you’re doing, and you really stay within that, you’re going to have a lot more success”.

Melonie recommends using no more than 2-3 hashtags per post. And sometimes it doesn’t make sense to include one at all. The key is to focus on being authentic and organic, rather than being obsessed with engagement, numbers and visibility.

#5: You’re Not Posting Enough…or You’re Posting Too Much!

As already mentioned, LinkedIn requires some different strategies than other platforms. For this reason, many people are unsure how often to post on LinkedIn.

Here’s something to keep in mind: When people Google you and want to know who you are professionally, it’s usually your LinkedIn profile they’ll click on first. Once they’re on your profile, they’re going to look at not just your bio, but also what you’ve posted. And according to Melonie, most people either post too frequently, or not at all. And it’s really about finding that balance.

When people Google you and want to know who you are professionally, it’s usually your LinkedIn profile they’ll click on first. Once they’re on your profile, they’re going to look at not just your bio, but also what you’ve postedClick To Tweet

Pro tip: Keep in mind that LinkedIn posts tend to have greater longevity than Facebook posts and tweets. A LinkedIn post can gain traction for a full week, so if you’re posting too often, you’re pushing aside those other posts that now won’t get the visibility they deserve.

Don’t just randomly tag people to get traction in their newsfeed!

Melonie often sees excessive or “attention-seeking tagging”; and there’s some evidence that LinkedIn may be penalizing users for this.

One of the effects of tagging someone in a post is that people in their network are going to see it. Then people who know the person who’s tagged are going to start jumping in and engaging with the post (“Oh yeah, I love that post by Gary!”). It becomes about that person, so it’s totally relevant.

But when you see a post where 10, 15 or 20 people are tagged and the post is absolutely irrelevant to them, it just looks spammy and desperate.

#7: Your LinkedIn Videos are Over the Top.

Have you noticed an increase in the number of videos being post to LinkedIn…and a decrease in the quality of those videos?

In Melonie’s opinion, a lot of the videos we’re seeing on LinkedIn these days are just over the top: “My fear is so many people have gravitated over to LinkedIn that people are going to start to ignore the newsfeed because there’s so much crap. There’s such a lack of substance being posted”.

And again, it’s all about quality over quantity! 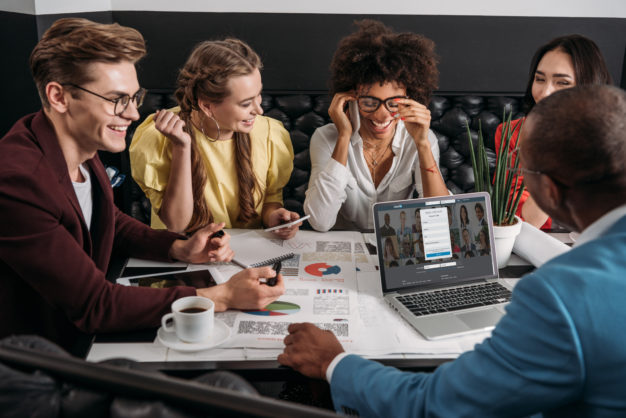 If you’re frequently creating random content with no thought to the end user or audience, there’s a good chance you’re coming across as desperate.

When creating content, Melonie recommends starting with these basic questions: Who is your target market? What are the specific problems, fears and desires they have? Then use your answers to create content specifically for those people.

It’s really about understanding who your audience is.

One thing to know about LinkedIn, according to Melonie, is that LinkedIn does not like links that send traffic off-site: so text-based posts tends to do better. And this is why she likes to include a link to her posts in the first comment, rather than in the post itself. Because while her posts are meant to educate her network, her main goal is still to drive traffic to her site.

Another strategy Melonie shared to get traffic is to add your own perspective when you share a link. Let people know why they should read it, open it or click on it. Perspective is what get people’s attention!

At the end of the day, Melonie recommends focusing on simply having a great presence, building your network with the right people, and moving conversations offline wherever possible.

She also stresses the importance of focusing on the things you can control, and that are absolutely guaranteed to get results.

This is why Melonie prefers to take a proactive approach on LinkedIn and in business in general: “I don’t like to sit around and wait…; This is why I’ve always been very focused on LinkedIn, because it’s been the platform where I can teach people how to actually get results, and see a positive ROI on every single investment they make in it”.

Are you using LinkedIn for your business? If so, have you been making any of these mistakes? Let me know in the comments below!