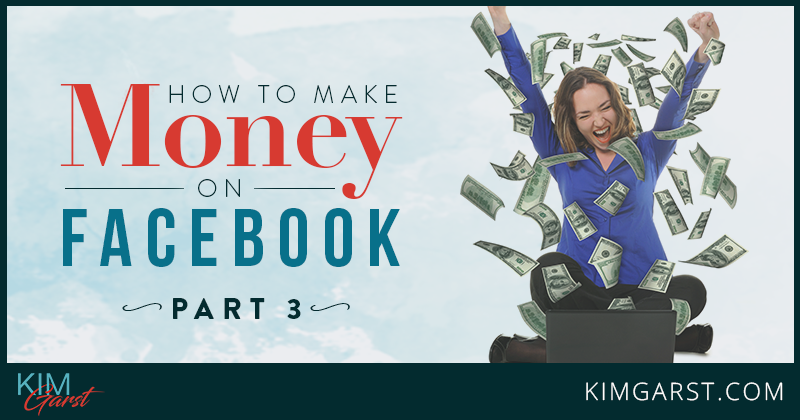 How YOU Make Money on Facebook Part III! Welcome to my third and final installment in this blog series…

Before I get started I want to make sure you understand exactly what I am attempting to do with this series…I have built a very successful business and made a lot of using Facebook and I want to show YOU how to do the same thing!

If this is something you are interested in? Then you are in the right place!

In Part 1 of this series, How YOU Make Money on Facebook Part I, I revealed my Facebook community-building strategy and my own Facebook selling formula. Then, in Part 2 of the series I gave you my exact Facebook posting strategy, along with examples, and showed you how I get $109,500 worth of FREE Facebook fan page likes every year without spending a penny on Facebook page promotion ads. I also gave you two real-world examples of Facebook posts that together helped add six-figures in annual revenue to my business.

If you would like Part 1, 2 and 3 of How YOU Make Money on Facebook all rolled into one easy to read PDF, you can download it now.

Sound good? Then let's do this!

Let me qualify this statement a little. Yes, I have built ads leading directly to sales pages and have sold hundreds of products that way. So, in some respects selling products directly on Facebook does work, but nowhere near as well as other How YOU make Money on Facebook strategies. This graphic will help me explain: 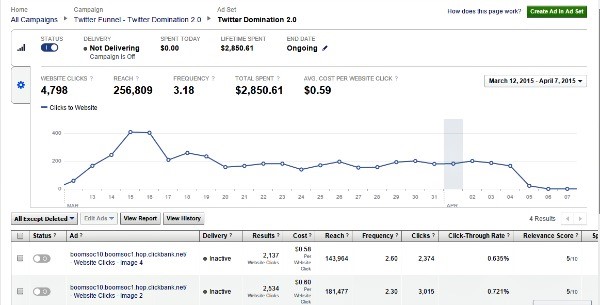 This was a Facebook Ad I ran directly to the landing page for a very successful product of mine called Twitter Growth Domination 2.0. For just $9 you can learn how to grow a large and targeted following on Twitter in 15 minutes a day. I KNEW the product was a hit because I sold THOUSANDS of copies elsewhere. It bombed in this Facebook ad…well, relatively speaking. Trust me, I built a great custom audience to sell the product to. I also did multi-variant, 3-level split-testing (I know, I know…it makes my head hurt just saying that…more on that later) so I know I had the best 2 out of 216 possible ad combinations to run traffic to.

Yes, I was able to reach 250,000+ people and had nearly 5,000 website clicks, but my Click-Thru Rate (CTR) was embarrassingly low. I could not get past .7% as hard as I tried and I consider anything less than 1.0% – 1.5% failure. I paid .59 cents per click (way too high!) and my “relevance score” was a 5. Worse than all of that was that I captured ZERO e-mail addresses, other than the 171 people who bought the product, and I had only 5 upsells to the next $47 product Twitter Sales Shortcuts. So, the “Return on Investment” (ROI) on this one ad was:

So what in the world was happening? Where had I gone wrong?

Now let me give you an example of what DOES work using the exact same products. I’ll start again with the actual Facebook ads graphic: 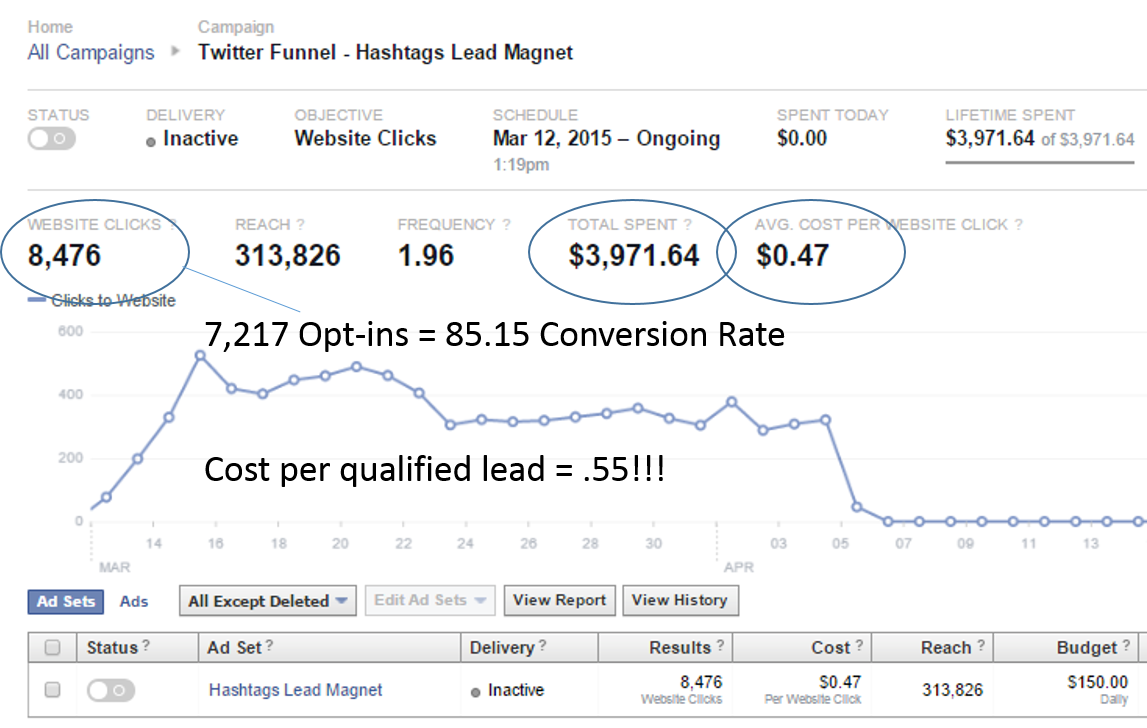 Believe it, or not, this is a Facebook Ad for the exact same two products (plus a third upsell!). The main difference is that I didn't try to sell the product directly from the Facebook Ad. Instead, I gave away this free eBook:

This is a BIGGEE…inside the eBook was a link to the Twitter Growth Domination 2.0 upsell I mentioned above along with two more upsells once you entered the sales funnel. The CTR for this ad was a huge 2.70%, and I ended up paying just .55 per qualified lead! Note: If you can EVER pay under $1 for a qualified lead that you can market to time-after-time because they are on your e-mail list, do it all day long! You will make your money back many times over! Yes, I spent $3,971.64 to give something away for FREE, but in return I…

Now let us see what that ROI looks like:

A little better, right? Plus, the biggest win is that I have added these people to my e-mail list which means I can offer them more amazing, value-based products in the future! Multi-Variant, 3-Level Split Testing (blah..blah..blah!) I promise, that will be the last time I say that! All this means is that I let Facebook do a bunch of work on telling me which ad variables are performing the best. I make changes to my Facebook ads in 3 areas over time based on how they are doing: 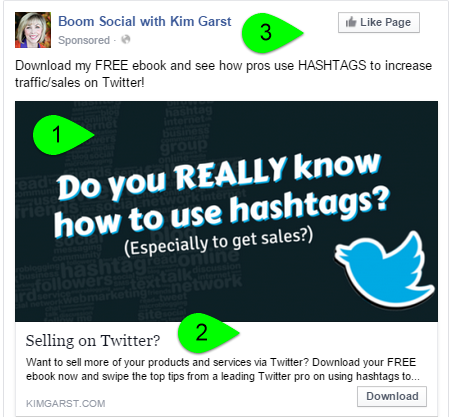 I have found that the graphic makes the biggest difference in the performance of the ad. Above is the actual ad I used to give away the free eBook I was telling you about. Facebook makes it incredibly easy to load up to 6 graphics for each ad and they will test to see which ones pull the best with your audience: 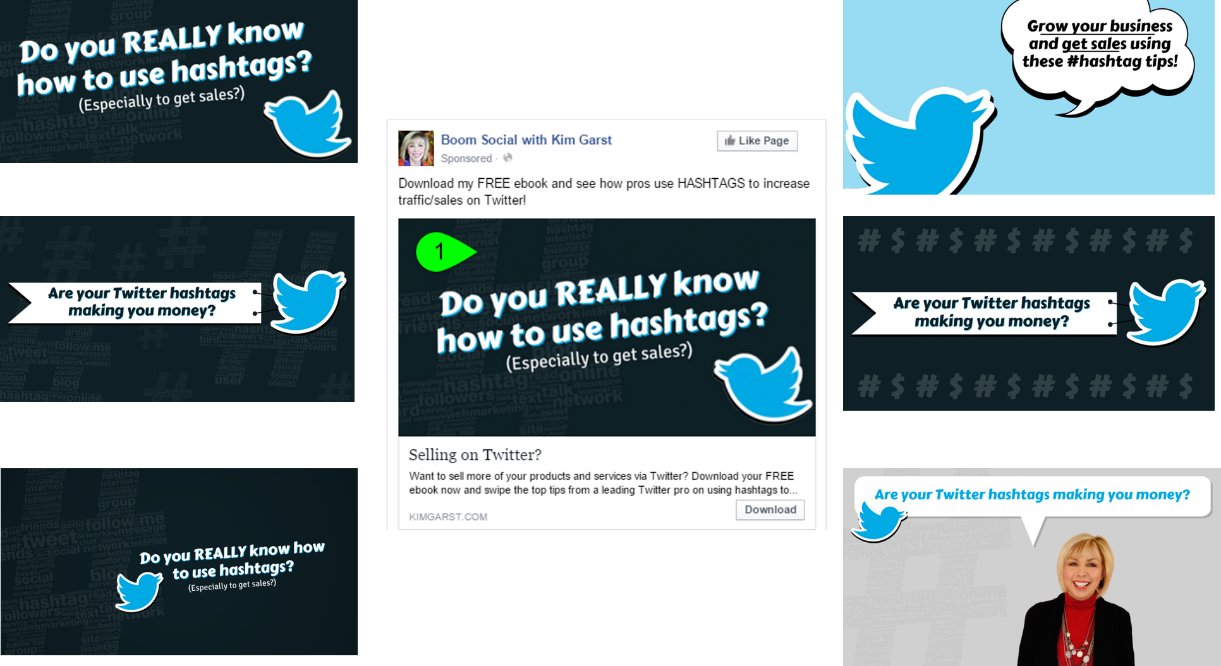 I ran the ad with all six graphics for a couple of days and there was a clear winner: 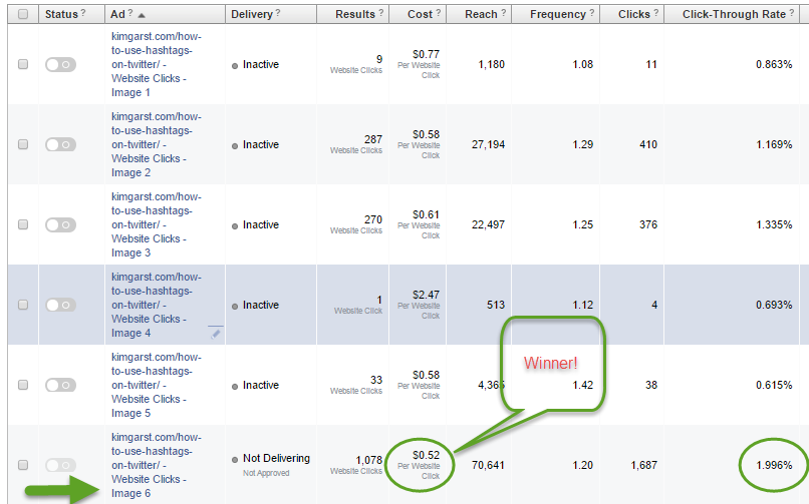 Armed with the best graphic, I then went to work on the area where I usually get the next greatest improvement in ad performance, the headline! 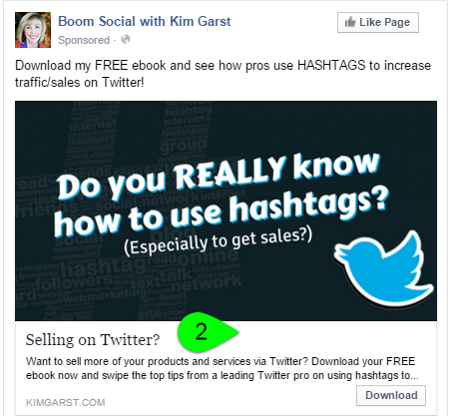 Can you spot the difference?

Another couple of days and I had another BIG improvement in performance! 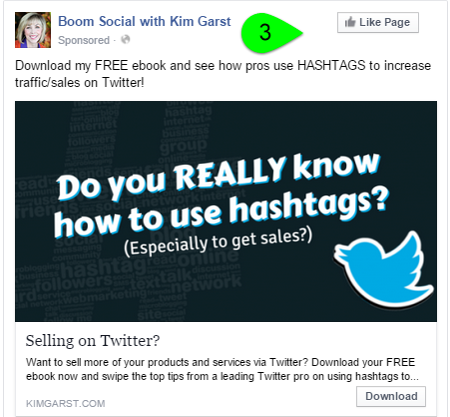 The graphic I led off this section was the final result of my efforts. The bottom line is I spent just a few days and less than 10% of my ad budget to build a Facebook ad that not only worked but DOMINATED! I dropped my Cost Per Click (CPC) 13.5% and increased my CTR by 19.2%. That's how YOU Can Make Money on Facebook. Let me pause for a minute to say this…

YOU CAN TOTALLY DO THIS!!!

Doing highly targeted Facebook Advertising absolutely works and Facebook has built some amazing tools to help you do exactly that. It all starts with the “pixel”! A pixel is a piece of code that Facebook builds for you that you can place in the header of a landing page that tells Facebook whenever someone clicks on any page where that code is installed.

Facebook will accumulate those “pixel fires” into something called a “custom audience” and you can advertise (retarget) directly to those people. Once you exhaust that audience with the click of a button Facebook will build you another audience that looks a lot like the one you just finished advertising to. That is called a lookalike audience. I have a minimum of 5 pixels (some Facebook and some Google Analytics) installed on all 500+ pages of my kimgarst.com website as well as the pages of the 11 other domains I use. 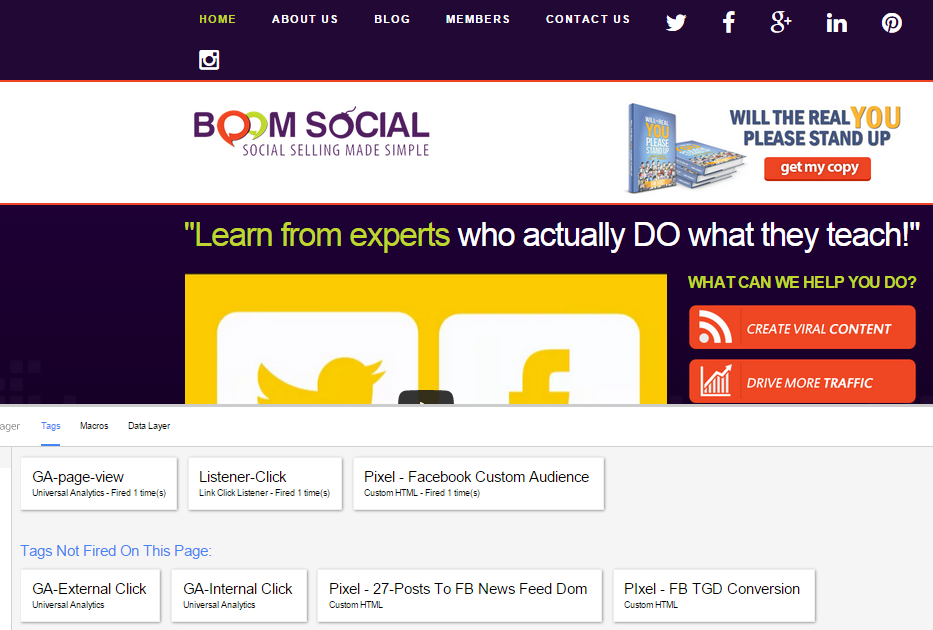 With these pixels, I build Custom Audiences with people who have taken certain actions (like visited a sales page but NOT purchased the product) and run very specific Facebook Ads to them. I can also track the movement of prospects through the various stages of my sales funnels as well as conversions along the way. My results are off the hook! Make the greatest improvement to your bottom line by mastering the “indirect traffic” and split-testing techniques I showed you above.

If you enjoyed Part 3 of How YOU Make Money on Facebook series, I invite you to grab all 3 articles. I have combined them into one easy to read PDF!

Also, what did you think about our series as a whole? Did you find at least one thing you could use? I would love to know your thoughts and what that one thing is below!

Great article as always Kim! I would love to learn more. I’ve bought several of your products in the past and always appreciate the amazing value you provide.

Kim – that was so great to see your successes (and more valuable your failure) on the campaign. Everyone should really look at this and learn from it. Thank you again – PS. We should do another podcast together! 🙂

Thanks J! We should, yes!

Hi Kim, Great tips as usual! I’m sharing this with my community and I’m sure they will love the tips you’ve shared.

Absolutely but the principles of “HOW” we did what we laid out in this case study, could be done by any business owner.

Risa, I would suggest taking a look at my Inner Circle. http://www.socialsellinginnercircle.net

Thanks Kim – I read all there articles just now.

I use Canva.com, Mark. Great resource 🙂