One of the most popular ways to get ready for a new year, especially in any kind of niche market, is to make predictions about what the next year might hold.  Planning and predicting have great value in helping you be ready to respond to changes in a market.  This way, you're always in a position to be able to provide value to your customers, no matter what happens.

But, as much as I think those are great posts, this isn't one of those.

After the rush of the holidays, I thought a different kind of post might be fun – something a little more light hearted to make it easier to get back into the swing of everyday life.

Now, if you've been reading my blog for any length of time, you know I believe that anyone can learn how to do social media marketing well! You Can Do It is my motto!

I'm not trying to poke fun at any unfortunate company (okay, maybe just a little!).  But even in these examples, there's great benefit when you can learn from the mistakes of others for your own social media marketing.

So – in a spirit of instruction and fun, I give you the Top 7 Social Media Bloopers of 2012.

7. Be prepared for all responses if you ask for customer engagement!

McDonalds ran a social media marketing campaign using promoted tweets with the hashtag #McDStories to promote its restaurants and ingredients.  Customers jumped in – but used the hashtag to call out their negative experiences with the fast food chain.

They quickly ended the campaign and appeared not to have an adequate strategy in place to respond to the criticism.

The lesson?  Be prepared for whatever responses you get, when it comes to customer engagement, and respond transparently.

6. If your customer service is called out on Twitter, make it right, at warp speed.

When Sir Patrick Stewart moved to Brooklyn this fall, he contacted the local Time Warner cable franchise to get his cable installed.

Unfortunately, the customer service wasn't particularly efficient, and he began to tweet about it.  Whoever tweeted back gave the standard customer service lines (and didn't follow through) until someone realized that this was, in fact, THE Sir Patrick Stewart of Star Trek (and Shakespearean) fame and decided to make a lame joke publicly.  Sir Patrick/Captain Picard was not amused. 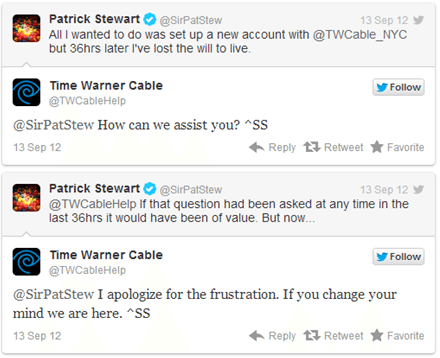 While humor can be a good way to help diffuse a situation, when you're the one in the wrong it appears unoriginal at best.  It's important to respect the members of your audience, especially in a public forum like Twitter.

5.  Trying to profit from someone else's tragedy is never a good idea.

Celeb Boutique tweeted this rather insensitive sounding message shortly after the Aurora theater shooting, and the reaction wasn't positive.

It's pretty interesting that the reason they gave for the mistake is that their PR company isn't US based and didn't know the context of the trending term Aurora.  There are a few lessons to be learned there – it's important to keep oversight over your social media even when you outsource it.  It's also important to check out the context of any trending term.

The Gap tweet about Hurricane Sandy speaks for itself – it's never a good idea to be glib in the midst of an emergency. 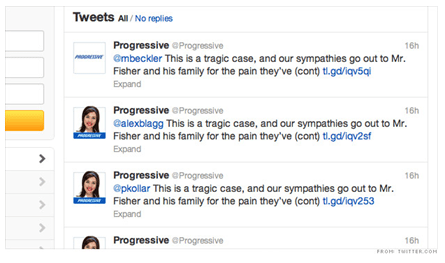 Progressive Insurance found itself in the spotlight during a recent court case regarding a driving death of one of its insured drivers.  When people sent messages to the company about its actions, the company's auto-responder, complete with their profile picture of the always perky Flo, kept sending out a response that sounded trite and insincere (at best).

During the first presidential debate, an employee of Kitchen-Aid responsible for social media updates posted the following from the company's account rather than his or her personal account. 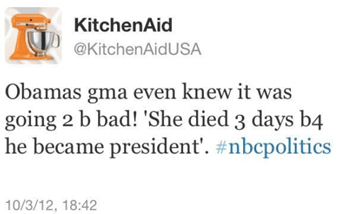 If your job has you tweeting on behalf of more than one company (not to mention your own accounts), create a system of double checks to make sure you're tweeting from the right account at all times, especially if your remarks are less than professional!

2.  Double check your tweets to make sure they're not at all contradictory. 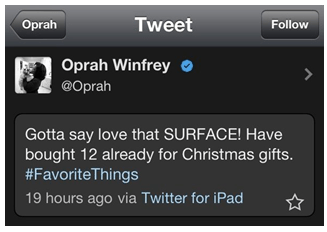 Back in November, Oprah's Twitter account sent out a rather nice message about her love for the new Surface tablet from Microsoft.  Kinda ironic that it came from Twitter for iPad, don't you think? <grin>

1.   If you don't have something nice to say, don't say it on a video and post to You Tube!

Over the summer of 2012, the fast food franchise Chick Fil A found itself in the news when some people decided to take issue with its owner donating to the causes he supports.  One such gentleman decided he would take his contempt of this one step further, and went through the drive through to request a free water, then harrassed the employee at the window about the company's stance – all the while recording himself to upload to You Tube.  The video went viral all right.  But instead of looking sophisticated and educated, he made himself look boorish and rude (and the young woman at the window came out looking far more professional than he did).

He started his day as a university lecturer and CFO; he ended it in the unemployment line, thanks to this video.  He's since pulled it down and posted an apology but people keep putting the original back up.

The bottom line:  Actions have consequences.  If you post something that comes back to make your employer look bad, the effect might be different than you expect.

What were your favorite social media blunders of 2012?  Leave a comment below – I think we'd all love to read them!

Great lessons to learn from…thanks for sharing Kim! Our world has us moving way too fast these days and we often do not stop to really think and reflect upon what we are "putting out there". Any and all public communications should be well planned and considered. Happy New Year!

Lauren, thanks for stopping by and Happy New Year!!

Erica, glad you enjoyed and thank you for sharing! 🙂

Love this … sometimes our challenges teach us as much as our wins.