How Social Media And Press Release Distribution Fit Together 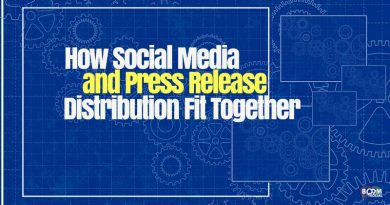 A lot of smart folks thought social media signaled the death knell of the press release. It certainly heralded a new way audiences could communicate with each other, including how those audiences shared news with one another. But did it kill the press release? Obviously not. In fact, it made them more powerful than ever.

As you've no doubt noticed, news releases have evolved. They now leverage the social channel in ways that few people imagined years ago. They include links so marketers can take advantage of SEO benefits. They also include videos, photos, iframes, and anchors to social bookmarking sites. There are lots of ways to use PRs today to drive engagement that just weren't possible in the “old days” (pre social media).

But you may be having a hard time getting a handle on how to make the most of online press release distribution through the social channel. Today, I'm going to give you a few ideas so you can hit the ground running.

Let's start at the beginning.

“Dress Up” Your Press Releases For The Social Channel

You've seen traditional press releases – the type folks used to receive through their fax machines. They weren't pretty (they weren't meant to be). They did one thing effectively and one thing only: they spread company-related news.

But they don't cut it online. And they're especially ill-suited for the social space. Just like you wouldn't wear shorts and flip-flops to church, you wouldn't use a traditional (ugly) press release to spread news about your company on Twitter and Facebook. You need to dress it up.

Create an intro YouTube video and embed it into your release. Upload photos of your store, staff, and products on Flickr, and embed one of those, too. Include a few links to your site within the body of your release. Add some pizzazz with a block quote or two. Put links to social directories and bookmarking sites.

With those small add-ons, your press release is now ready for prime time in the social channel! You can take the lazy route and simply post it to your Facebook page and Twitter account. If you're lucky, it will get someone's attention and that person will share it with their friends.

But let's use a little creativity to get folks involved. Here's one idea…

Create An Important Piece Of Content To Promote With Your PR

People love content that addresses subjects that are important to them. That was the case before we were born. And it'll certainly be the case long after we're gone. So, let's leverage that in our online press releases.

Invest some time into creating a fantastic piece of content that deals with something closely related to your business. For example, you could create a white paper, video presentation, or an entirely new content-filled site focused exclusively on the topic.

Now, draft a press release to promote it. Link to the content you've created within the PR itself. You can put your content behind an email subscription wall, but that's not a great idea if you're using the social channel to reach as many folks as possible. Make it easy for your fans and followers to enjoy your content, and they'll spread the word for you.

Post your news announcement to your social media accounts and encourage people to share it with others. Tell people about the benefits of reading your content, not the merits of your PR.

Organize A Contest To Drive Engagement

Admit it, you love contests. So do I. More importantly, everyone else does, too. The question is, how can get some mileage out of that fact in your social media press releases?

First, pick a prize. It needs to be something folks want. Ideally, it should be related to your company, either directly or indirectly. For example, you can award the winner with one of your high-value products or services. That's the direct route. Or, you can give out a Kindle Fire, iPad Mini, or iPhone loaded with social media apps that help the winner share future press releases you send out. That's the indirect route.

Second, design the rules of the contest so the event promotes your business. For example, don't ask people to upload their funniest dog pictures or cutest baby pics. Instead, ask your fans and followers to create a short 30-second commercial for your company on YouTube. You'll pick the winner.

Last, create your press release to promote the event, and send it out.

See how this gets people involved? See how it drives engagement and participation in a way that's fun and exciting? (We'll cover how to run contests in social media in more detail down the road.)

So, that's it in a nutshell. Social media obviously didn't kill press releases (duh!). It made them more powerful than ever. The trick is using a little creativity in your PRs to make sharing news about your company fun and beneficial for everyone.

How are you currently using the social sphere to spread news about your business? Have you run a contest yet? If so, what were your results? Let us know by sharing in the comments section!

Indeed you are correct I have tried to drive engagements through my website but in such a small niche in which I work it’s not easy. Though people love promotions and extra stuff I sometimes shower my loyal customers! Great read!

Thank you so much Meble. We really appreciate it.. Boom Care Squad – Aida