Don’t get Twitter? It is OK to admit and you are definitely not alone. Apparently there are many who don’t! I always do keyword research before starting on my blog posts to make sure that there are people searching for what I want to share. I found when I typed in “I don’t get Twitter”, there were almost 2 million search results. WOW! So there are lots of folks who simply don’t get Twitter. I have to admit, about 9 months ago, I was in the same boat. I didn’t understand how anyone could find anything when, before you could read one tweet, your page refreshed with 30 more tweets! It made me want to scream!

If you don’t get Twitter, should you? YES! I have become a huge Twitter fan based off my own results and the results I have been able to generate for my clients. Twitter is an amazing social media platform and one you do not want to ignore simply because you don’t get it.

So how do you start to ‘get Twitter’? The best way is to find someone who has already hurdled the learning curve and do what they do. I can give you this advice because I know how much time and money I invested in learning how to use Twitter. When I decided that I was tired of not getting Twitter, I buckled down, spent lots of $’s and countless hours consuming everything I could get my hands on that revolved around Twitter.

I hear people all the time saying that they don’t get Twitter and now that I do, I just want to scream from the rooftops…

On a daily basis I get questions about how to use Twitter, how I built my Twitter following so quickly, how to monetize it and the list goes on.

So the question became how can I help people get Twitter?

About three  months ago, I decided to package my system into a training product. I released this first info product,Twitter Muscle; on September 5. Twitter Muscle is a proven system designed for the average user to get extra-ordinary results within Twitter in less than 90 days!

Using this same system, I built my Twitter following from 2700 to approximately 55,000, targeted, monetized followers in about 8 months. Not only that but I grew my income to over six figures AND increased my list by over 700%!

When you release a system there is always that little niggling fear that whispers to you, “you can do it but can others?” I am here to say, YES, others not only can do it but they are doing it!

Thanks to Kim Garst and Twitter Muscle, I have boosted my following from 2,900 to over 5,600 followers, a MUCH faster growth than I have ever experienced being on Twitter from day 1! Plus, with her help, I now have an auotresponder message that ignites real, useful conversations for my business! I' getting over 10 messages every single day!

I started using what Kim taught on Twitter Muscle 5 weeks ago and was able to grow my followers from 500 to over 2,400 today. I was off for 2 weeks, in fact, only used the program for a full 3 weeks. Now I get retweets, mentions and Facebook likes too. My website traffic from Twitter has gone up as well.

In just 2 months Kim has helped me increase my Twitter following from 1,300 to over 9,000. This increase in Twitter activity has directly helped build my online list for my business, presale multiple copies of my new book, receive questions for our live radio show, and even connect with local business prospects in my local area offline. I strongly encourage you to listen to Kim if you are looking to understand and leverage the power of Twitter and what it can do to help build your business and expand your natural network.

Kim has taught me things about Twitter that I never could have known otherwise. She was able to show me why the numbers are important, what I should tweet about and not tweet about. How to manage my twitter account and how to develop it. I started out with 500 followers 5 weeks ago and right now I have over 3000 followers. Plus she showed me how to get the right followers, people in my niche. That’s what I really like about Kim's program. I definitely would recommend Twitter Muscle to anybody! Thank you Kim for being such an awesome teacher!

With Twitter Muscle I went from totally not “getting” Twitter to actually enjoying the interaction. My followers have grown from 300 to 1600 in less than 6 weeks (and that's with not trying very hard)! Best of all, I have seen a big increase in website traffic, Facebook friends AND product sales!

Kim taught me all the tools and methods the pros use to effectively grow, manage and use my Twitter account for business. Following her training in Twitter Muscle I've doubled my following in a pretty tough niche. Because my followers are of such high quality I get somewhere around 10 to 15 retweets and shares per blog I post to twitter- all with under 500 followers, and that's quite a conversion rate.

I want you to get serious results using Twitter.

Learn how YOU can build a real community of targeted followers on Twitter, make more money and create a huge list all by tapping into the power of Twitter!

If you really want to put some MUSCLE in your Twitter account…this is the tool to make it happen! 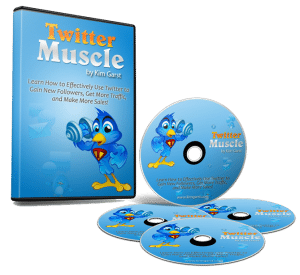 Where else can you get 200 new targeted followers in a few hours? All I know is, if you are serious about social media, you need to pump up your Twitter account and I can show you how!

I have already learned so much from your Twitter advice–looking forward to ordering Twitter muscle so I can start growing by leaps & bounds instead of step-by-step.

Great info…love hearing from your clients! Can’t wait to get my own copy of Twitter Muscle!

Thanks Kim! You are always there for people who are so confused about twitter and don’t really know how to approach it and what to do. Twitter Muscle sounds great!! 🙂

I own your Twitter Muscle and I think it is an excellent program – although admittedly, I have not used it to it's fullest capacity like I know I should. Honestly – I don't how people keep up with everything social media – you still need to create product and have a family life…

Kim, you are an amazing woman who has taught me so much from your informative posts and articles! All of this content without spending any money. I know I can count on you to address all of my questions and to offer tips on social media. Elizabeth Maness told me about you and she was right – you are a wonderful resource!

Thank you so much, Terry! Glad that I can be a great resource for you. Elizabeth is amazing too!

Yes, Twitter Muscle walks you through exactly what I have done to not only build my following but how Twitter is my platform that I am generating the most business from.