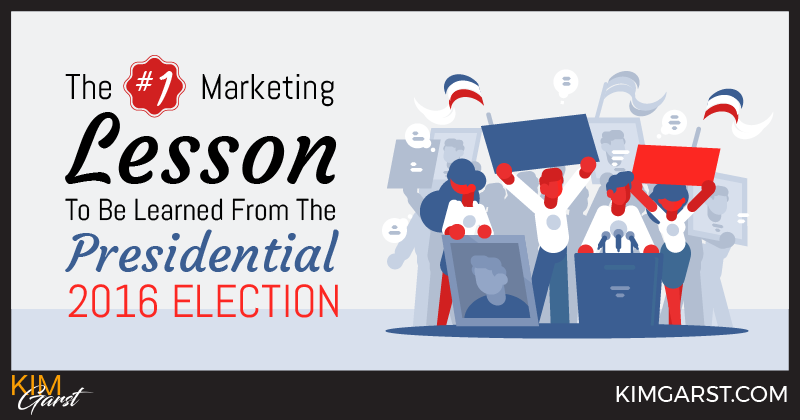 I think most of us are pretty happy that the election is behind us. In the weeks leading up to it, many of us wished we could just skip past the fighting and smear campaigns and put it all behind us.

But before you stop reading, let me assure you this is NOT a political post!! Remember…this is a marketing blog 🙂

As someone who is immersed in marketing day in and day out, I can’t help but look at the election through that lens.

While the complex issues surrounding the election certainly can’t be boiled down into one simple marketing lesson, I do believe there’s one takeaway we can directly apply to business. And that lesson is this: If you want your audience to believe in you, support you and buy from you, you need to listen to them and then act accordingly.

If you want your audience to believe, support and buy from you, you need to listen and act accordingly.Click To Tweet

To some extent, both candidates did this.

Hillary Clinton, for instance, is said to have used analytics as her “invisible guiding hand”. Instead of simply listening to the buzz on the street, she relied on Elan Kriegel, her Director of Analytics, to tell her exactly what the American people wanted and how best to reach them.

In fact, some suggest that she consulted with Kriegel before making any major campaign decision. Clinton’s campaign manager, Roby Mook, said of Kriegel: “From our schedule to our voter contact to where our organizers spend their time, almost everyone here interacts with his work and their work is influenced by his insights.”

Trump also invested heavily in analytics throughout his campaign. According to CNN, analytics were Trump’s secret weapon, allowing him to tailor his ads to voter personalities, beliefs and interests.

In addition, Trump became known as the candidate who was on the ground, talking with and really listening to his audience.

This allowed him to hit on issues that were close to the hearts and minds of many Americans. People who felt like they had been forgotten or ignored by politicians in the past finally felt heard.

He accomplished this in a number of ways. First, he went where his ideal audience was. He campaigned in states where he knew he could have an impact, rather than fighting to sway a few voters in states that didn’t represent his “target market”.

Second, he knew what his audience wanted, and he gave it to them. Instead of trying to appeal to every single voter in the country, he clearly defined who was likely to vote for him, and then promised them he would give them what they wanted: to “make America great again”.

How we can apply this lesson to our own marketing

What you may be wondering at this point is “How do I use these strategies in my marketing to reach my target market?”. Following are some strategies you can use to identify and listen to your audience.

Listen to what your audience is telling you directly

This seems like such an obvious one, but unfortunately many business owners don’t take the time to really listen.

There are a number of places your audience is telling you exactly what they’re struggling with, and what they want and need from you:

Take some time to aggregate all the comments and questions you’re seeing. Have a simple spreadsheet or document where you compile all the FAQs and comments you’re seeing, and then use them to inform your content and marketing decisions.

Social listening is a strategy every business owner should be using. It involves actively listening to what people are saying about your brand and products, as well as common questions, issues and concerns they have.

While you can learn a lot from listening to what your audience is telling you directly (see #1 above), much of what you need to know is being said elsewhere online.

Social listening is a strategy of actively listening to what people are saying about your brand online.Click To Tweet

This is where social listening tools come in handy. Some of the ones I frequently recommend include:

For a complete list of tools you can use, check out my post Social Media Monitoring Made Easy: 15 (Free) Tools You’ll Want To Use Today.

Listening is great, but it’s not enough. You also need to act on what you’ve learned.

Listening is great, but it’s not enough. You need to act on what you’ve learned!Click To Tweet

It basically means following through on what you’ve learned, and giving people what they want. If you can’t or don’t want to follow through, you might as well not have listened in the first place!

There’s a lot of stuff that happened during the election that I’m sure we all want to forget. But, I hope this marketing lesson – the importance of listening to your audience and then following through – is one you can remember and use as part of our own marketing strategy.

How will you use this in your marketing? Share with us below!

Personalization and sharp shooting was the key in terms of Donald Trump winning the election. He knew how to localise the ads for the local community and he knew his TG. He spent bucks on paid advertising and created PR buzz every second day.