Ever wonder why some social media and blog posts get significantly more attention than others? Maybe you have even promoted the exact same content several times to your Facebook fans, and seen different click-through rates each time. 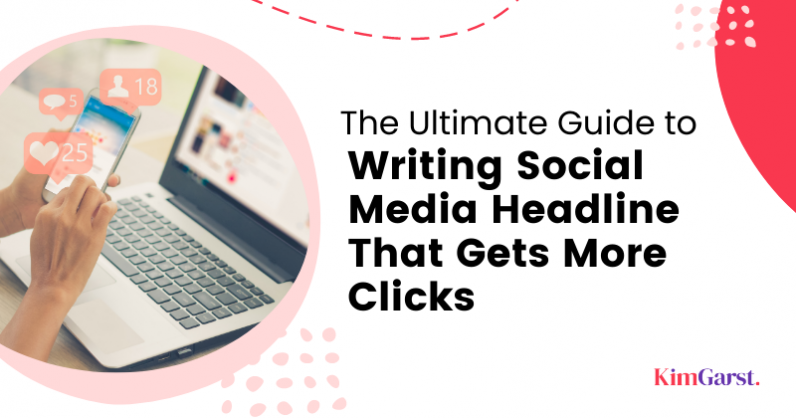 According to Quick Sprout, tweaking a headline by just one word can result in up to a 46% increase in click-throughs.

According to Quick Sprout, tweaking a headline by just one word can result in up to a 46% increase in click-throughs.Click To Tweet

If just one word can make such a huge difference, don’t you think it would be well worth your time to figure out how to make the most of your social media headlines?

This post will give you ideas and strategies for coming up with the BEST social media headlines that get more clicks.

Be sure to let me know your thoughts at the end of this post!

What Exactly Do I Mean By ‘Headline’?

Throughout this article, when I refer to the headline of a social media post, I am referring to one or two sentences within your tweet or post copy, the ultimate aim of which is to capture the attention of your viewers and to elicit a click.

In fact, due to the space limitations imposed by social media, in many cases your entire social media post will be your headline!

[Tweet “With a blog post, the aim of your headline is to get people to read the rest of your article. “]

On social media, however, the aim of your headline is to get people to click your link. Because of this difference, I have broken the rest of this article into two sections: We will start with social media headlines, and finish up with blog post headlines.

Following you will find a number of tips specifically for eliciting clicks when posting on social media. While some of these tips are network-specific, all are worth testing on various social media channels.

It’s important to note: While engagement metrics like shares, retweets, comments and, likes are obviously very important, for the purposes of this article I’m focusing only on clicks. Although, most of these tips will result in increased engagement on all levels!

While this tip could probably be considered more of a call to action and less of a headline, its impact on click-throughs is so significant I couldn’t leave it off this list.

What this means for you: If you don’t already offer an incentive for signing up for your email list, you may want to consider offering a free downloadable product with signup. Promote the product via social media, and use a clear call to action like ‘Click here to download’.

We know that shorter social media posts tend to outperform longer ones. In fact, on Facebook, posts between 100-250 characters receive 60% more engagement than posts that are longer than 250 characters.

So what does this mean for your Facebook headlines? Obviously your headline – that sentence or phrase that’s meant to capture the attention of your followers and get them to click on your link – needs to be short, sweet, and it really needs to pack a punch.

Resist the urge to include too much information, and instead focus on merely hinting at your content. Give a very brief excerpt from your blog post, rather than giving it all away. Your goal is to pique interest, not to write a book!

While an image on Facebook can’t technically be considered a headline, because of its impact on click-through rates it’s definitely worth mentioning here. According to research done by Kissmetrics, posts with photos receive 84% more clicks than those without.

When in doubt, add an image! 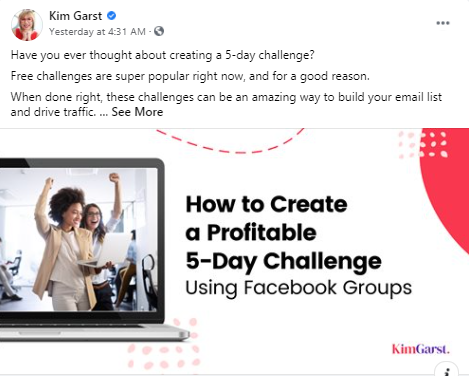 Facebook posts with an image will always outperform those without

4. On Twitter, Be Sure to Try the Best-Performing Keywords

According to research by Dan Zarella, there are certain keywords you can include in your tweets that will increase the likelihood that your content gets retweeted. And while he doesn’t mention their impact on clicks, I can only image there would be a strong correlation between the two.

According to research by Dan Zarella, there are certain keywords you can include in your tweets that will increase the likelihood that your content gets retweeted. And while he doesn’t mention their impact on clicks, I can only image there would be a strong correlation between the two.Click To Tweet

By examining approximately 10,000 of the most retweeted tweets in his database, Dan came up with a list of the 20 most retweetable words and phrases.

I would encourage you to try including these in your Twitter headlines where relevant and see how they perform. Please note: these are listed in order of their popularity.

This makes sense, given what we’ve learned throughout the history of advertising. Famous adman Leo Burnett even once said, “Dull and exaggerated ad copy is due to the excess use of adjectives.” In other words, overusing adjectives can make your headline sound fluffy, wordy, and well, boring.

Some action words or phrases you can consider using may include save, boost, earn, act now, launch, achieve or earn. When possible, make sure to use the present tense of your verbs, even though at times the past tense would also be accurate.

Unfortunately, many marketers and business owners don’t fully realize the impact their headline can have.

They don’t think about the fact that without a catchy or intriguing headline, many people won’t even bother to click on the post. People will never even see that content they slaved away at for hours!

According to CopyBlogger, [Tweet “8 out of 10 people will read headline copy, but only 2 out of 10 will read the rest”].

This means that your headline has some heavy lifting to do…it sounds silly, but it can truly make the difference between a post that flops, and one that goes viral. After all, if no one bothers to click on your post, how can it possibly get the attention it deserves?

For the rest of the post, I am going to cover some ideas for eye-catching headlines that will get your readers to actually read your blog posts. Following that, I will give you a list of 30 sample headline templates you can use the next time you are trying to write a headline!

(Many thanks to Startup Moon for some of these research-based tips!)

30 Sample Headlines You Can Use for Your Own Blog Posts

Sometimes the best motivation for writing a winning blog post is seeing what headlines have worked well in the past.

I will leave you with some headline templates that have been proven effective time and time again. The next time you’re stuck coming up with content ideas for your blog, try running through this list and choosing a headline that inspires you!

I hope this post has given you some insight that will help you on your mission to create the most captivating, enticing headlines possible. Keep in mind that the quality of your headlines – both on social media and on your blog – can have a huge impact on the success of your content. So don’t be afraid to take your time and test different headlines to see which perform the best!

Looking for more tips on how to write great headlines? Check out my post The Secret to Writing Kick Butt Subject Lines.

Great tips, especially for those of us fairly new to blogging. Thanks 🙂

Thanks Holly, and welcome to the world of blogging.. I hope you enjoy it and get a lot out of it – Boom Care Squad – Aida

I always look forward to your blog posts and discovering the Content Idea Generator is a good example of why! I tried it with some existing words in a post of mine and discovered a curiosity generating tweet! Thanks Kim.

Glad to hear you got some value from this one, Mike! Agree on #4…to use RT or Retweet? Numbers support the full word! 🙂

Awesome to hear you picked up a nugget, Vatsala! Thanks for dropping in and I hope you will come back often 🙂

I will definitely be returning to this post again and again till I am much better at writing headlines! And I will use it in the Media class I am teaching next year. Thanks!

That’s great Meryl,
IT is always helpful to practice, and hopefully your class will find it helpful, as well. – Boom Care Squad – Aida

This is great! Thank you for sharing. I’m going to try and implement some of these tips right away.
Carmen

Carmen,
Thanks for reading and for commenting. We can’t wait to hear, which tips were most helpful to you. – Boom Social Squad – Aida

Never would have thought that asking them to download on Twitter would work. Can’t wait to give it a shot!

Let me know how it goes for you, Blake?

Glad to hear you picked up some tips, Sherman! I will have to give yours a try as well. Thanks for sharing!

Excellent post Kim. Thanks so much for the great information for better results on social media.

Rhonda,
Glad the information was helpful to you… Hope you get a lot out of using it. – Boom Care Squad – Aida

Awesome! Thank you! Such valuable info and learning experience for me!

Claudia,
Thank you for letting us know that the information was helpful to you. Boom Care Squad – Aida

Love the guide. I picked up several ideas for our blog. Thanks!

WOW! Such great content Kim! Thank you so much for sharing. I will be using so many of these tips in the future 🙂

I will start using these tips in my blogs. I think the tips you provided will help to increase my blog exposure.

Nice post, I agree Kim! Looking at the data for all my clients posts and my own over the years, there seems to be an immutable truth or two for sure: Calls to action get more clicks, and posts that evoke curiosity in the headline get more clicks.

Thanks so much Wanda we really appreciate you reading it, and letting us know it was helpful – Boom Care Squad – Aida

Thanks for dropping in Christina!

As with all tools, it’s how you use the tool.

Amazing informative tips for bloggers who have just started! Thanks for sharing 🙂 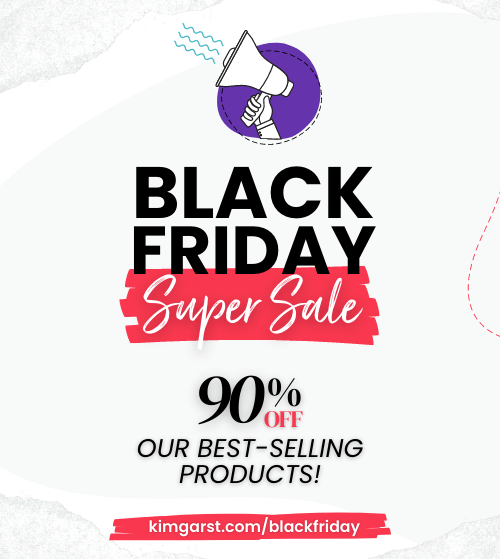 CYBER MONDAY SALE
GET THEM NOW

Done For You Social Media Images 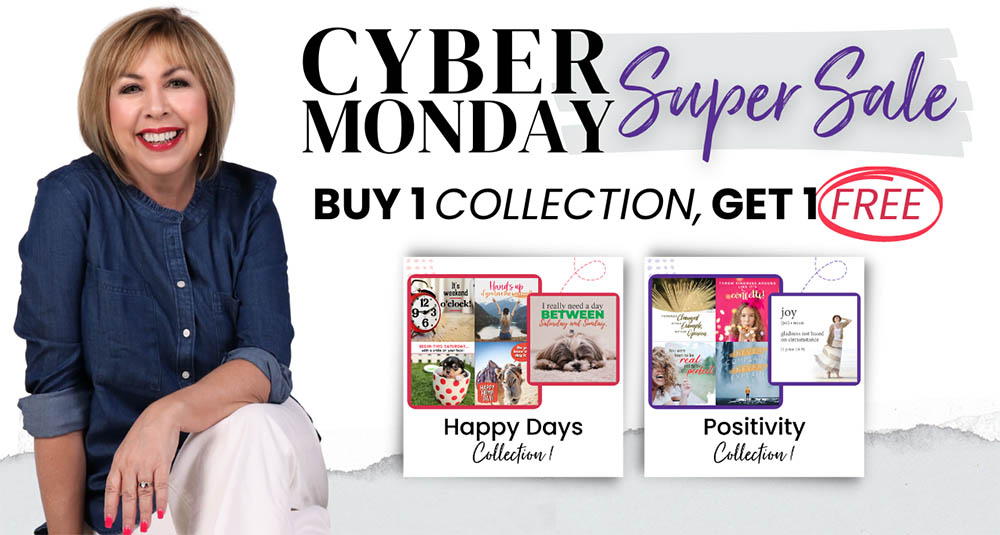