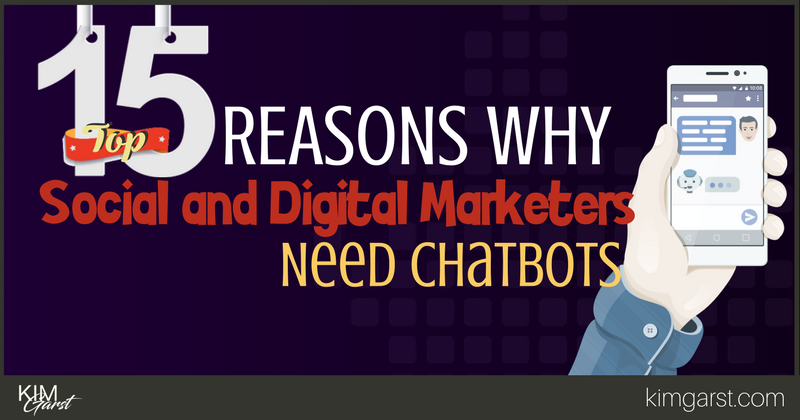 Chatbots are the next big thing in digital and social media marketing, and for good reason. They are basically like little personal assistants that fill in for you when you’re not online, or when you’re busy doing something else. But even bigger than that…they allow you have a one on one conversation with your prospect.

They also let you maintain a high level of customer service while also making you more efficient and yes, they can even save you money.

Still not convinced? Following are 15 reasons every social and digital marketer should be using chatbots. Thanks to the folks at Chatbots Magazine for the awesome infographic on which this post is based!

Let me introduce you to my newest program, The Facebook Messenger Bot Academy. The complete A-Z system that will simplify the process of creating your bot marketing strategy and turning it into a list-building, revenue-generating machine.

1. Over 2.5 billion (yes, BILLION) people now have at least one messaging app

Use of messaging has reached an all-time high, and shows no signs of slowing down. According to The Economist, this number is on trend to grow to 3.6 billion in the next couple of years. If you’re not already connecting with your customers and prospects via a messaging app, you don’t have any time to waste. Wondering which messaging apps are worth your time and effort? The most popular ones right now are WhatsApp and Facebook, followed by WeChat, Line and Viber. 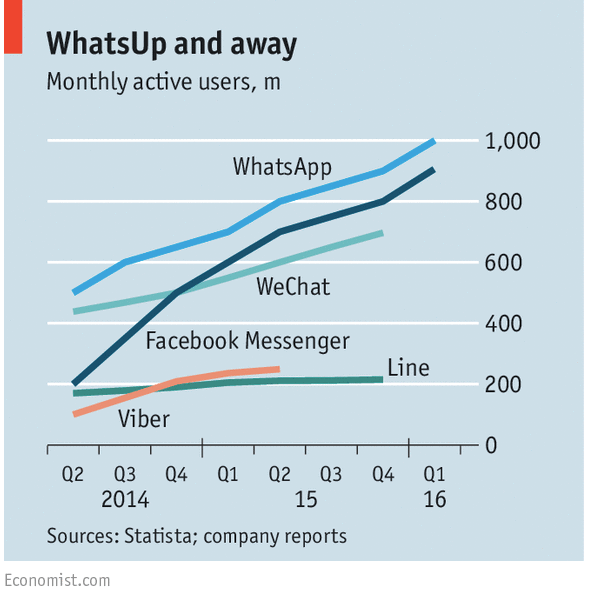 And contrary to what you might think, it isn’t just old people who use Facebook! According to Andrew Lipsman, Vice President of Marketing and Insights at ComScore, there are still plenty of Facebook users in the coveted 18-34 age group. In a New York Times interview, he states, “You hear a narrative that young people are fleeing Facebook. The data show that’s just not true. Younger users have a wider appetite for social media, and they spend a lot of time on multiple networks. But they spend more time on Facebook by a wide margin.” In other words, if you’re on the fence about using Facebook – and Facebook Messenger chatbots, in particular – it’s time to get off!

You know those 2.5 billion people who have at least one messaging app? They’re sending A LOT of messages! According to The Verge, they’re sending a cumulative 60 billion messages on Facebook and Whatsapp each and every day; this is three times as many as SMS, and this number is only likely to grow. Side note: Interestingly, the popularity of Facebook Messenger is growing faster than Facebook’s other properties, Whatsapp and Instagram. So if you’re looking for one messaging app to focus on, Messenger is a great bet!

The use of both social media and messaging apps have been growing steadily since 2011. But in 2015, the use of the top four messaging apps surpassed the use of the top four social networks. Business Insider notes that while most marketers are still spending more on social media than on messaging, this is likely to change in the not-too-distant future. And after reading through this whole post, you’ll see why! 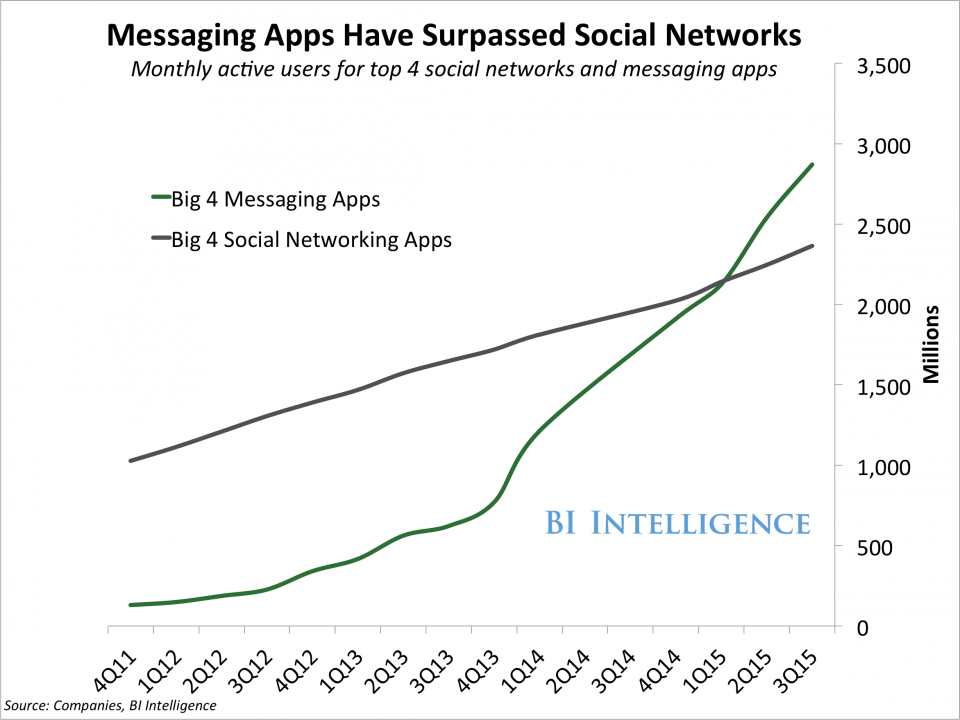 5. 49% of smartphone users don’t download any new apps in a given month

According to Comscore, the number of new apps being downloaded is looking pretty grim (especially if you’re an app developer!). In June 2016, nearly half of all mobile users didn’t download any apps, while 13% downloaded one and 11% downloaded two. It looks like most users are now content to use the apps they currently have (including existing messenger apps).

Almost 28% of consumers surveyed say they “strongly agree” that businesses should respond 24/7, while almost 23% say they “agree”. Only 3.6% of respondents said they “strongly disagreed” with this.  If your business isn’t accessible online 24/7, guess who your customers are going to reach out to?

7. Consumers in the US say messaging is their #1 preferred customer service channel

And it’s not just Americans who prefer messaging: it’s also the preferred customer service platform of users in South Korea, India and Singapore. It’s also among the top three choices among users worldwide. In fact, 9 out of 10 users globally say they want to want to message with brands – WOW! This puts messaging miles ahead of every other channel, including email, phone, face-to-face, live web chat and mail.

8. 66% of people prefer to communicate with brands through messaging

Twilio found that this is particularly true among younger users. Millenials and Gen X’ers said they preferred messaging over email, phone and web chat. Why is this? According to Twilio, Millenials “don’t want to call your 1-800 number and wade through a lengthy menu of choices. They don’t check their email every hour or even every day. They are used to getting message notifications.” Why should we expect them to be any different when communicating with brands?

9. The vast majority (85%) of people want to hear from and respond to brands via messaging

Overwhelmingly, consumers want businesses to engage in two-way conversation via messaging. According to Twilio, they want to reply to order confirmations and appointment reminders, give product feedback and reply to delivery statuses. If you’re not using messaging, you could be forgoing these valuable opportunities for conversation with your customers!

If you’re like most business owners, you’re probably frustrated by the low open and click rates you get via email. Consumers have become jaded when it comes to email, largely because of the sheer volume of spam they get in their inbox every day. Texting, on the other hand, is still largely legitimate with only 1% of all texts being spam. This is likely why texts are opened approximately 98% of the time….this is just too good an opportunity for businesses to pass up!

With the average adult spending 23 hours each week texting, it’s no wonder most choose messaging as their preferred mode of communication. Think this number is inflated? Given that US consumers now use their mobile devices an average of 35 hours per week, this seems just about right! You know the saying, “Be where your customers are”? Clearly your customers are texting, and you should be too!

12. It only takes people an average of 90 seconds to respond to a text (as compared to 90 minutes by email)

Given that consumers want to receive and respond to text messages from brands, this stat should make business owners excited. Would you rather wait an hour and a half to hear back from a customer, or receive a response almost instantly? This rapid-fire communication provides an incredible and unprecedented opportunity for business owners who want to genuinely connect with their customers.

David Marcus, head of Facebook Messenger recently said that using a chatbot to book airline tickets was “pretty close to having a native app, and definitely better than mobile web.” If this is really the case, why wouldn’t every consumer choose to use chatbots for their browsing? And as a business owner, why wouldn’t you want to take advantage of this incredible opportunity to provide the best experience for your customers?

Gartner believes that a time is coming when most business interactions will be with chatbots. This isn’t surprising given their belief that chatbots are actually cheaper and more effective than humans in many ways. They write, “Chatbots will soon deliver customer satisfaction at significantly lower cost than human customer service agent”. They go on to say, “Chatbots are growing in popularity because AI systems can manage customer and worker progress through a decision tree more effectively than human direction can”

15. 10% of people would rather give up sex than texting

There’s no denying it: people who love texting REALLY love texting! In fact, according to Twilio, many people would rather give up sex, their morning coffee and phone calls rather than giving up texting.  That says a lot!

In some ways, we’re just at the beginning when it comes to using chatbots for business. But I hope this post has given you a glimpse of the opportunities and benefits that are waiting for those who do decide to give chatbots a go.

Looking for more tips on how to use chatbots for your business? Check out these helpful posts:

Are you using chatbots for your business? If not, how come? Share below!

I guess the next big thing will be AI chatbots able to convince the customer to make a purchase or solve an issue.

Very well explained and written about chatbots and AI. It was quite helpful indeed. Not only does Digital Marketing, but other industries also benefit. A little more business integrations and better customer experience will work out wonders.

chatbots are much helpful for time and human resource-saving it gives much faster then human. no more communication problems.