Why We Should Thank All The Haters 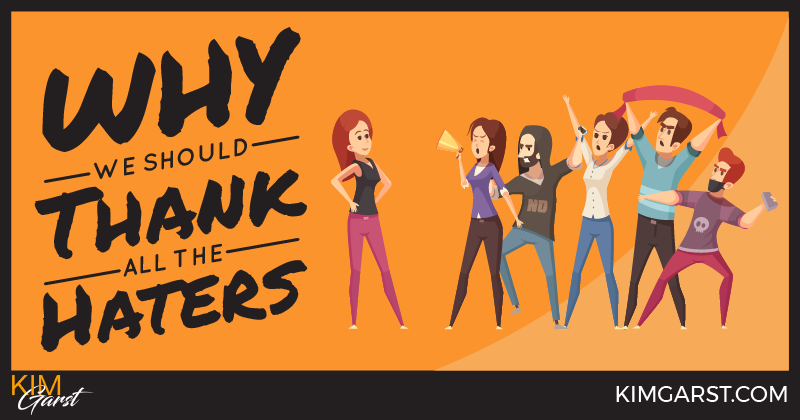 Have you seen the More Cowbell sketch from Saturday Night Live? It’s more than just funny. Believe it or not, it’s a powerful metaphor for a successful work life. And it provides insight into the kind of people you need on your team, and what makes an effective team.

Everyone has at least one cowbell — it’s your unique, profitable talent people pay you for or your company's unique offering.

It’s something people have a fever for. When you discover it and give those people a ton of it, you gain success and happiness for both yourself and others. It’s a win-win.

A cowbell is simultaneously something you love doing and something other people really want as well (although, as we’ll see, you still will have detractors and critics). A cowbell creates joy for you and other people. It makes them yell for more. They can't get enough.

We’ve seen many shy away from that next step toward greatness because they want so much to be liked. They don't want any enemies. But if you stand for anything, you absolutely will have enemies. They don’t have to be an archnemesis. It doesn’t have to be violent opposition. It might be passive-aggressive. Someone might gossip behind your back.

If you just want friends, become a Buddhist and stop pursuing material things. Become a communist and stop trying to have more stuff than others. Join a church and stop lusting after anything except spiritual greatness. But even Jesus said his followers should expect enemies; and Jesus himself was not Mr. Popular with the masses during his earth tour.

Power and fame always attract detractors. Roadblocks that stop the average sharpen the skills of the great.

“People just don't understand how obsessed I am with winning. Everything negative — pressure, challenges — is all an opportunity for me to rise.” — Kobe Bryant

Sometimes in a championship series you’ll see a member of one team talk down in the media about a star on another team. This can backfire, spurring the dissed star to an unstoppable performance in the next game. Competitive types often use detractors as fuel to work harder and prove themselves. If you want to be a star, use every failure and personal attack to increase your intensity, practice harder, and win.

“You have enemies? Good. That means you've stood up for something, sometime in your life.” — Winston Churchill

When Brian first began blogging and speaking at Internet marketing conferences, it wasn’t long before he received some criticism, some of which seemed emotional and unreasonable. And some of it might have come from how he wrote and spoke. He had some crazy ideas for making his talks unique and illustrating his points.

At the Scary SEO conference in 2008, Brian pretended to hypnotize a coworker he’d brought with him, and had him slap himself. It was an absurd example of influence meant only to create a laugh.

At Pubcon Vegas in 2008, he gave away a pink stuffed pony as the prize in a small Twitter contest. Then the woman who won the pony had a bunch of pictures taken with microfamous Internet marketers. She sent them to Brian and he wrote a blog post about it. There was a lot of criticism that this wasn’t a useful post. Perhaps they saw the tactics as too obvious. It didn’t really matter; it yielded a lot of interaction and buzz. Sometimes when you succeed, other people are jealous, especially if they have internal rules that keep them from doing it the way you did. (See Amanda Palmer’s TED talk about people yelling at her to, “Get a job!”)

Brian talked it over with his agency CEO at the time. His CEO said, “If you don’t have haters, you probably aren’t really putting yourself out there.”

Brian also pinged Rand Fishkin about it. Rand is CEO of Moz, then called SEOMoz, and had ascended to his microfame not long before. Rand said, “I definitely agree with your CEO. When we had no haters, we were too small to be significant.”

You can’t make everyone happy. Even celebrated leaders have detractors.

Think about how many people have stood up for something and not long after were assassinated: Martin Luther King, Jr.; John F. Kennedy; Mahatma Gandhi; John Lennon. If these great people were killed for fighting major cultural and political trends, isn’t it reasonable you might at least get a few negative Facebook comments for being honest or for striving for something big?

A useful psychological principle for understanding this phenomenon is projection. Wikipedia says it’s “the act or technique of defending oneself against unpleasant impulses by denying their existence in oneself, while attributing them to others. For example, a person who is rude may constantly accuse other people of being rude.” Another way to put it is that we blame other people for our own failings.

If you’ve ever been jealous of someone else’s achievements, you’ve been on the hater side of it. What’s a hater? Urban Dictionary says a hater is “a person who simply cannot be happy for another person's success. It’s hard to avoid being a hater when you’re unhappy with your own life.”

Another example people give for this is the crabs-in-the-bucket analogy. Seafood chefs can place a certain number of crabs into a bucket without a lid, and they’ll never get out. The reason is that as one crab tries to walk on the others to reach the top, a crab below it pulls it back down by trying to ascend itself. This teaches us two lessons: Don’t walk on others to get to the top, and trying to pull down the people ahead of you isn’t constructive for either person. You would think the human race had risen above this type of behavior, but the truth is we have to personally make the effort to conduct ourselves with civility in the crab bucket we call society. It’s just like life in the big city: The smell and walking sideways may be unavoidable, but how we treat others is up to us. (That last sentence mercifully ends the crab metaphor.)

If you have strong dreams or ambitions and are stuck — not actively pursuing them — you will be vulnerable to jealous hater behavior. Your own unfulfilled potential can create that. Do you secretly have a list of people you think don’t deserve the fruits of their labor? It’s more constructive to congratulate successful people and build relationships with them. That’s the win-win.

Get Your Free Digital Copy Of The Cowbell Principle 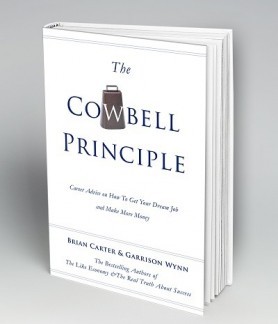 This post is an excerpt adapted by Brian Carter from the forthcoming book The Cowbell Principle: Career Advice On How To Get Your Dream Job And Make More Money, by Brian Carter and Garrison Wynn. Brian and Garrison will be giving away a limited number of digital copies at launch time. To get notified when they’re available, sign up at http://thecowbellprinciple.com/getnotified

Thank you for this enlightenment.

Great article Brian and Kim I appreciate you sharing this. I will be sharing this with my community!