Why Women Entrepreneurs Do More With Less 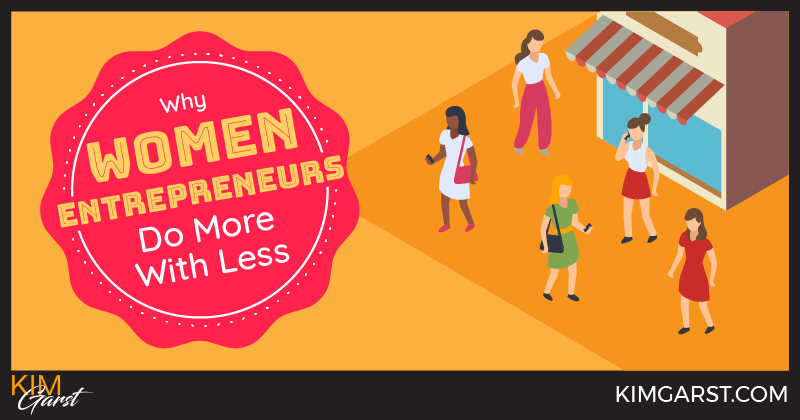 Why Women Entrepreneurs Do More With Less – but do they? Read on to find out…

I’ve had the pleasure of working alongside many amazingly successful women entrepreneurs over the years. In many cases, these are woman who have found ways to seamlessly balance their work and personal lives, remain strong in the face of incredible challenges, and compete against even the toughest competitors.

I’ve thought a lot about how these amazing women have managed to succeed in spite of all the obvious roadblocks they’ve faced. And one of the traits or abilities that comes to mind again and again is this: these are women who are able to do more with less.

I’ve found this trait manifests itself in two primary ways: being more efficient and productive with less time, and needing less money/funding to start or grow their businesses.

Research seems to back this up. According to the Global Entrepreneurship Monitor, last year, female entrepreneurs needed only half as much money to start their business as their male counterparts. While the typical woman invested $10,000 to get her business of the ground, male entrepreneurs invested an average of $20,000.

Perhaps it’s partly because of their upbringing, or maybe it’s because of a tenacity that’s just part of who they are. More likely, though, it’s a skill they’ve developed due to the expectations and responsibilities they’ve dealt with over the years.

This article takes a sneak peak at some of the reasons why many women entrepreneurs are able to do more with less.

Research suggests that women between the ages of 35-44 are most likely to launch a business, whereas men have fairly consistent level of entrepreneurship throughout all their working years.

Presumably, this trend is largely due to many women choosing to stay home and raise families in their 20’s and early 30’s. They may have trained for a particular career prior to their family commitments, but after raising a family, are now ready to get back out into the workforce, or to find/create a job that allows a better work/life balance.

But why does this necessarily mean female entrepreneurs “do more with less”? One reason may be that women in this age group likely still have children at home. They have oftentimes been the primary caregiver, and are unwilling to sacrifice this role simply because they’ve started a business.

These are women who have less time overall, but who still have a fierce determination to start and grow a business.

Women may have less time overall, but they still have a fierce determination to start and grow a business.Click To Tweet

They may have less time to commit to their business, but they make it work by being ruthless in how they manage their time.

Society still expects women to “do it all”

It’s not only internal drive and determination that leads female entrepreneurs to balance their time so effectively. As much as we may not want to admit it, often society still tends to expect women to “do it all”: to be the primary caregiver, to manage the household, to be successful in their business or career, and to do it all with grace.

Despite all the talk about gender equality and sharing responsibilities within the home, the statistics are clear: women still do far more work within the home than men. While 85% of women report spending some time on household activities each day, only 67% of men say the same. Granted this has come a long way in the right direction!

This can put an extraordinary amount of pressure on female entrepreneurs, especially those who are dedicated to raising a family. Yet, perhaps because of this challenge, many women entrepreneurs step up to the plate and become masters of managing their time – even when they’re being pulled in many directions all at once.

Many women entrepreneurs step up to the plate and become masters of managing their time.Click To Tweet

Women tend to minimize their business success, meaning they may push harder than they need to

While this would make sense if these statistics matched the financial reality, just the opposite is true. In the same survey women actually reported higher profits than their male counterparts.

In other words, female entrepreneurs – even those who are more financially successful than male business owners – are more likely to minimize their business success.

I believe this is a major impetus for female entrepreneurs to keep pushing, keep working long hours, and to never give up, all in an attempt to achieve business success…even after they’ve already achieved it.

Women are more likely to start a business out of necessity, resulting in a “do or die” attitude toward entrepreneurship

It’s widely recognized that entrepreneurs start a business with two distinct motivations: either out of necessity (because they need to, usually due to being unable to make a living), or out of opportunity (to take advantage of a business opportunity). The first, was certainly my driving force when I started my first business, oh so many years ago. Desperation can breed great things!

Many female entrepreneurs I’ve spoken with share a similar story. They had raised their families, and now their income was needed, either to supplement the family income or to single-handedly support themselves and/or their families. However, their priorities had changed, and their previous careers were no longer a good fit; either because of financial limitations or a poor work/live balance.

These women tend to approach entrepreneurship with determination and steely resolve: they need to make this business work, for their own sake and for that of their families. There is no other option but to succeed…even given the limited time and financial resources they have to work with.

Perhaps more than ever before, women entrepreneurs face challenges that threaten to seriously undermine their business goals. And yet, in spite of these challenges – or maybe even because of them – female entrepreneurs continue to surprise and inspire us, starting and growing their businesses with less time and money and fewer resources.

This makes me proud of these woman and proud to call myself a woman entrepreneur!

Why do you think? Do women entrepreneurs do more with less? Share in the comments below!

Yes, I agree with you on all the topics you have shared because I do believe that Women can really do better than men even with the fewer resources.

It’s felt so good to know these two main reasons: being more efficient and productive with less time, and needing less money/funding to start or grow their businesses. I’m also an entrepreneur and proud of me Thanks for this wonderful article!

This not only an interesting article but also it is very important message for all women. It shows us clearly how hard we work to get results, how persistent we are. That text encourages us to do more, appreciating how powerful we are and what we’ve done so far. Thank you, Kim!

Hey Kim, Well, I agree, we have to face many challenges, but i believe that we can do it with ease, we have the courage to rise above all the problems & challenges and become successful. Cheers.