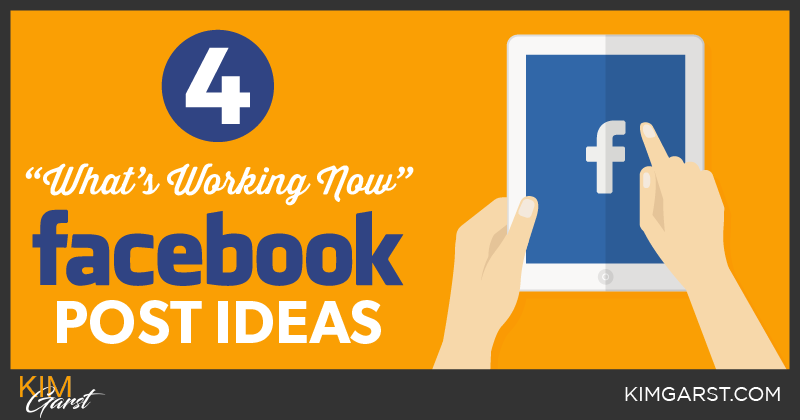 How is it going with getting your posts seen by your fans on Facebook these days?

Let me guess. You have great stuff that think your fans are going to love.

You post it and wait anxiously for all of the Reactions (used to be Likes), Comments and Shares you are bound to get (WOW! what a Facebook community-building genius your are!) and then…

…CRICKETS! and a big UUUGGGHHH, what happened, right?

I will say it again…it's NOT your fault. The truth is that Facebook has stacked the cards against you.

Let me put it another way.

If you post 8 “status updates” a day to your Facebook Fan Page for an entire week, guess how many, on average, your Fans will see without paying Facebook money to show your posts to them?

I do a little (A LOT actually) better than that. For the first quarter of 2016 I averaged a daily reach of…well, you can see for yourself:

I have a little over 265,000 Facebook Fans, so that gives me an average daily Facebook reach north of 300%. And, I don't spend a penny on Facebook ads to boost my posts!

Wanna' know how I do it?

I am gonna tell ya'.

As background, I first published a post on how you too can get free Facebook reach over two years ago. I updated that post last year. So far, 200,000+ people have viewed the post and shared it 40,000+ times!

What I am doing works!

What's working NOW on Facebook is a lot different that what used to work.

I recently updated my 27 Killer Facebook Post Ideas with what's working NOW. Without further adieu, here is the best of the 27!

Facebook Live, Facebook's free live streaming app is not necessarily new. Celebrities, athletes, movie stars and a few chosen “influencers” have been able to use it for months, but now it's being rolled out to all Facebook users, slowly but surely.

That's kind of a big deal.

But what's REALLY a big deal is how Facebook is looking at video. At the recent F8 conference in San Francisco, CEO Mark Zuckerberg told the world that video was going to be front and center on the Facebook platform for the foreseeable future.

Also, Facebook has tweaked their post ranking algorithm and made several other changes that give video, and especially Facebook Live videos, a serious nod in the free reach area – like a 10x factor when it comes to more REACH!

Bottom line, use Facebook Live and your free reach numbers will go up, way up.Click To Tweet

Want to see some proof? Check out the stats from a recent Facebook Live video broadcast. 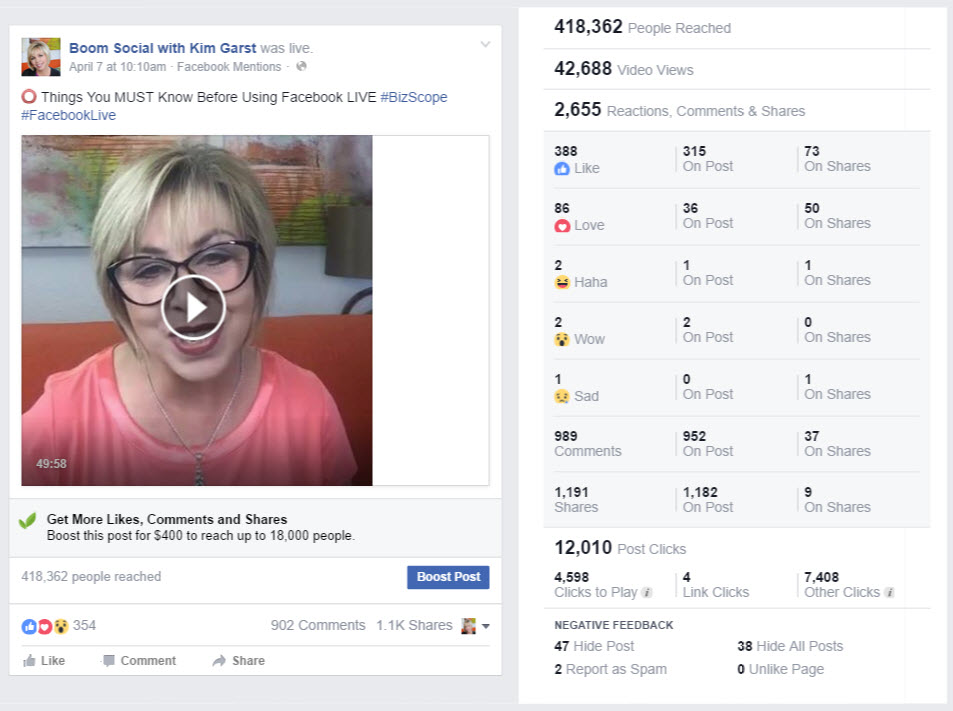 Yep, you guessed it, $0 (ZERO DOLLARS) spent on Facebook advertising here too!

[RELATED: 4 Reason Why Facebook Live is Now a Leading Player in the Live Streaming World]

You have seen Graphics Interchange Format posts, or GIFs. They are the animated pictures that move. They get a lot of free reach on Facebook NOT necessarily because Facebook gives them any special ranking algorithm treatment, but because they are the type of content that gets shared…A LOT!

To make sure they work on Facebook you will need to copy and paste the url of the GIF into the “status update” box. Uploading an animated GIF to Facebook using the “add photos/video” function does not work, at this time.

There are lots of GIF makers out there. I like giphy.com, animatedgif.net and gifs.net.

Quick test…take five seconds and look at THIS! 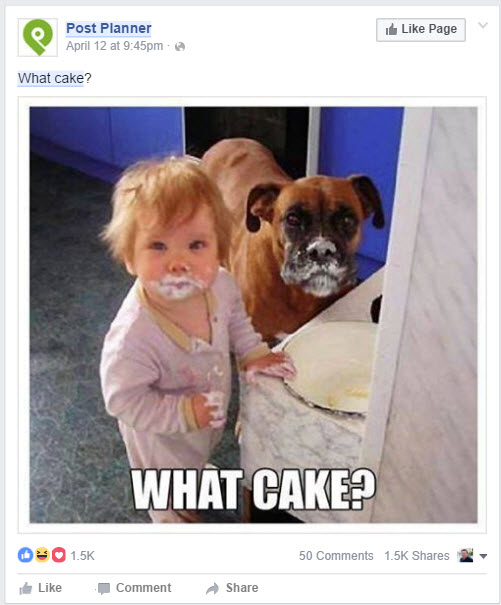 Social media should be social, and sharing a laugh is about as social as you can get. Until Facebook becomes an entirely “pay for play” platform, humor is always going to get free reach because people like to SHARE a laugh.

Social media should be social, and sharing a laugh is about as social as you can get.Click To Tweet

And, it is ALWAYS going to make any list I ever put together on what's working now on Facebook too!

Here we are again, VIDEO!

Are you noticing a trend?

I am telling ya', it's THAT big and there is no quicker way to get free reach on Facebook than by uploading your videos directly to Facebook (NOT just a link from YouTube or Vimeo).

So, even if you are not into the whole “Live Streaming” thing yet, you can take advantage of the extra pop Facebook is giving to native videos uploaded directly to Facebook as a “status update”.

They also have several other very cool options such as creating a photo carousel, slide show (which looks like a video!) or a multi-media “Canvas” if you want to get really fancy. 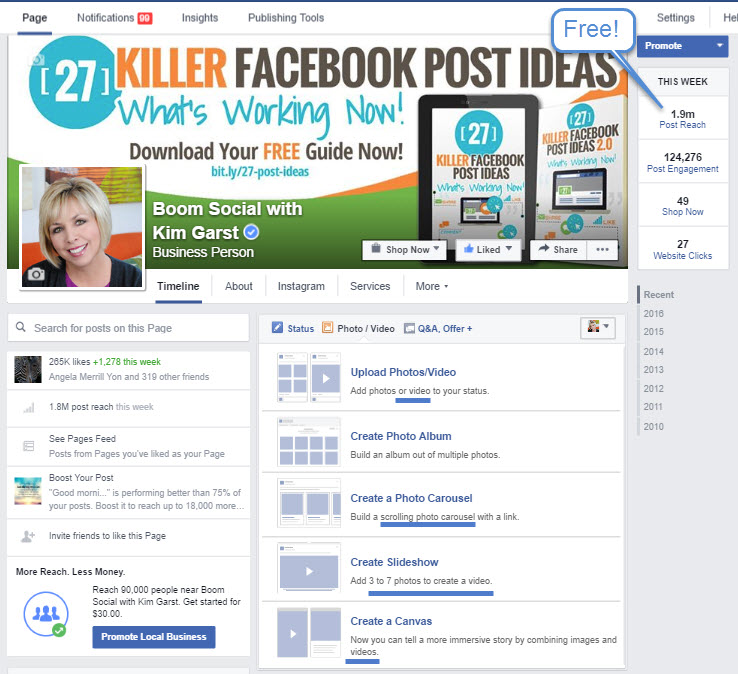 So is that it?

The four post ideas above are definitely what's H-O-T and part of what's working now on Facebook, but NOT everything. There are 23 more included in my brand new FREE guide 27 Killer Facebook Post Ideas 2.0.

65,000+ people downloaded my first version of this guide. This is the NEW, UPDATED one and includes only the things that have I have personally tested and proven to work on my very own Facebook Fan Page.

It's my FREE gift to you! Just tell me where to send it! 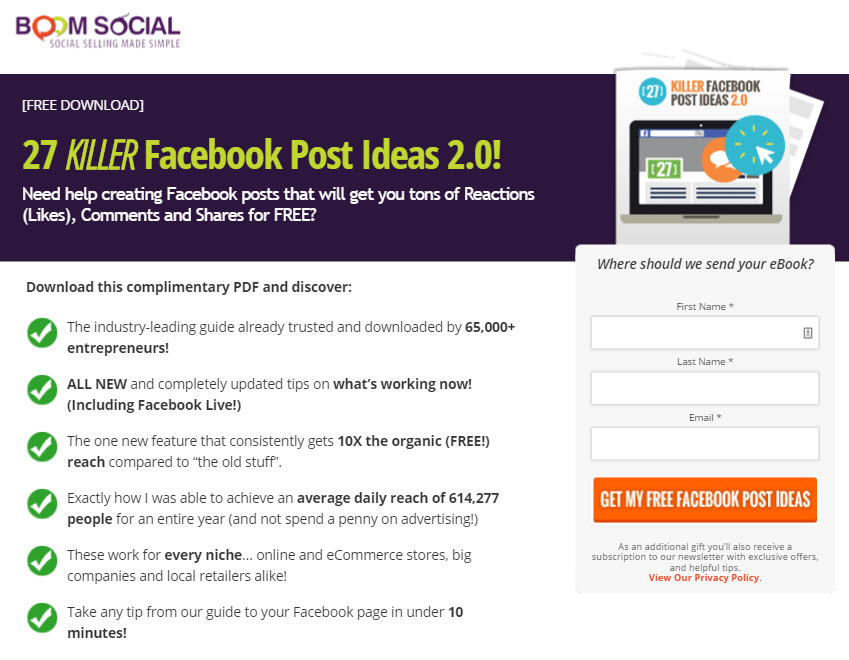 What's working for you on your Facebook Fan Page? I would love to hear in the comments section below!

I crated an animated video yesterday and posted it was fun to make and leaning about the different apps out there.

Facebook users are already quite a long time, so that after reading your article I found myself not know many features of facebook. Thanks for sharing.