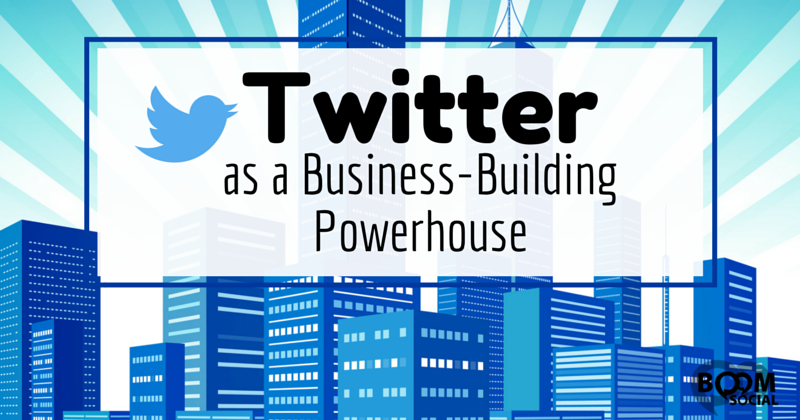 Twitter launched in March of 2006. I joined and started building my Twitter community about 2 years later. When I first started with Twitter, I didn’t get it. How could the “what’s happening” Twitter prompt be used for business? It took a lot of digging in for me to realize that Twitter could be a HUGE business-building powerhouse tool.

Boy, was I right!

I have owned an online business for over 20 years and have never seen a better traffic source than Twitter. Twitter IS a massively effective FREE traffic generator and FREE lead-generating tool and, without a doubt, Twitter marketing flat out works!

Thanks to my friends over at Simply Measured, I can see the global impact of my Twitter account:

These are my Twitter stats for the last 28 days:

Roughly an hour a day!

Yep, that is it. More about exactly how I do that later!

Twitter is my #1 source of social media referral traffic and consistently in the top 3 sources of my website traffic as a whole. I also use it consistently to drive traffic to my free offers which lead to “top of funnel” products and services with amazing results. Plus, unlike Facebook, I can do it all for FREE!

Twitter rocks for me. Honestly, my company, Boom! Social, wouldn’t be anywhere near as successful as it is without Twitter.

However, after a lot of mistakes along the way, I finally figured out how to use Twitter for my business. Let me explain what I mean by this…

Now do not get me wrong, there are real opportunities to “move fast” on Twitter. For instance, here is a post I did not too long ago on one “technique” that can instantly double your traffic on Twitter: Increase Twitter Traffic 100% by Using this One Simple Trick.

However, most days you win by simply making a consistent effort and following a simple strategy.

Unlike Facebook, although tweets can get a lot of retweets, they typically do not go “viral”. I have one post on Facebook that got, well you can see… 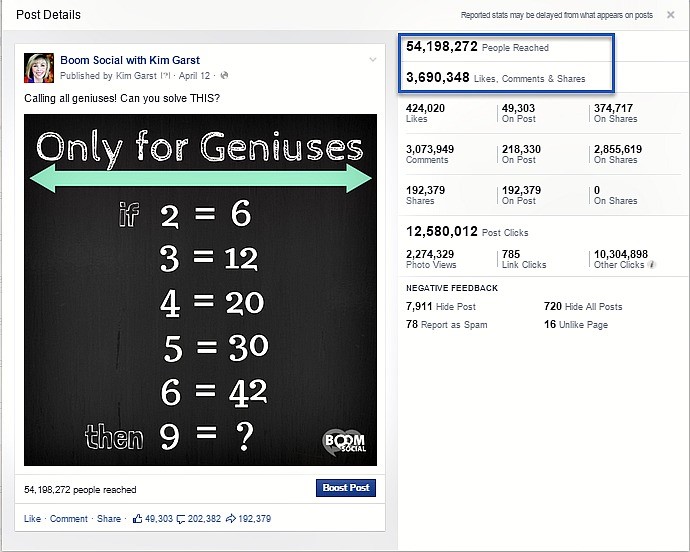 My top-performing tweet did just a fraction of that number. 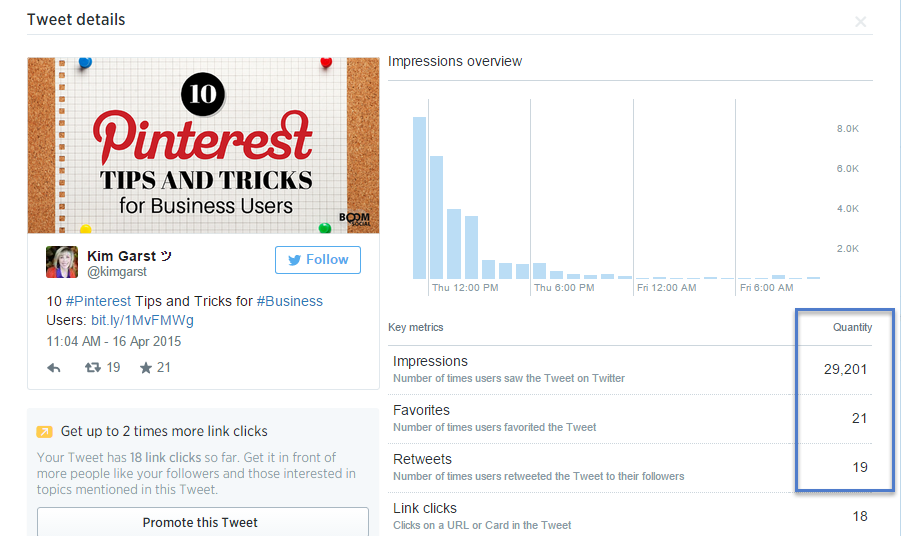 Because of that, I tweet approximately 100 times/day (don’t panic…this number includes my engagement tweets) on Twitter while I only post 8-10 times/day to my Facebook Fan Page. Following this strategy you can see that I still had 7.38 MILLION impressions on Twitter in the last 28 days.

Guess how much money I spent on Twitter advertising to do that?

By comparison, my Facebook ads spend will likely be over $200,000 this year!

Note: Again, before you panic and say “No way I am tweeting 100 times a day!” Remember, I only spend an hour a day on Twitter, so there are some pretty cool tips, tricks and techniques I will share with you in a bit that will allow you to do the same thing in the same amount of time. 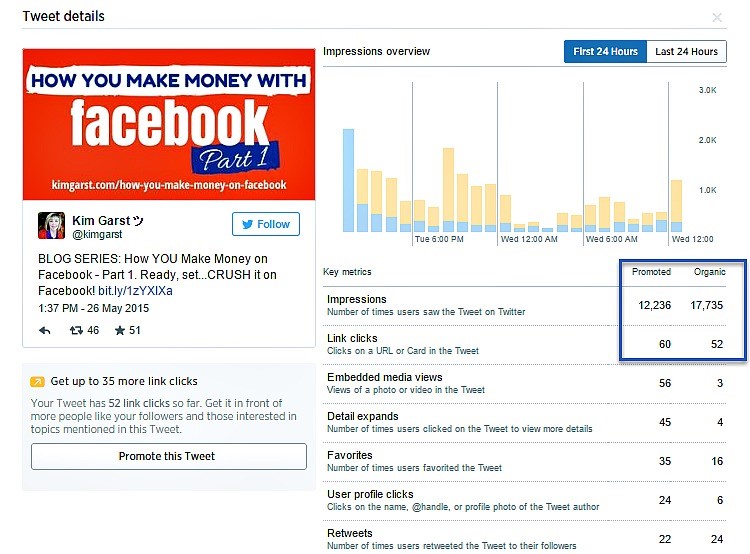 I am purposefully taking a left turn here for a minute to talk about Twitter and Facebook advertising because I think this is reason enough to go all in on Twitter.

Here are the analytics for a tweet I recently did running traffic to a blog post. I pixeled the page to create a Facebook custom audience to later run advertising to for a new product I recently launched:

Yes, I did get 60 clicks for the promoted reach and only 52 for the organic reach but I paid $0.00 for those and $2.34 (CRAZY!!) for each promoted click! Plus, I can send more FREE tweets getting FREE clicks anytime I want.

Getting that same kind of reach on Facebook would have cost me about $250.00. 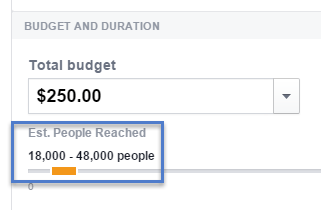 I know Twitter is working hard on refining their ads platform and I will keep my eye on them and will continue to test the waters as they improve.

What is the alternative? Use my Twitter content strategy and get all of that traffic for FREE! Doing so saves me $20,000/month in advertising costs.

I am going to tell you what that strategy is below, but first, let’s talk about growing a large and highly-targeted Twitter community.

How You Grow a Large and Targeted Twitter Community

You saw from my stats above that I consistently add 10,000 – 12,000 new members to my Twitter community every month. Guess how long that takes me each day?

We are not talking just ANY followers either, but highly-targeted followers who are interested in social media and digital marketing. Many of whom will eventually buy my products and services.

How do I do it? I use awesome and very inexpensive tools (ones you can absolutely afford), and follow an exact and detailed procedure I developed and refined over the last 6 years.

I don’t have the time in this post to lay out how I do it in detail, but I did build a mini-course where I tell you exactly, step-by-step, what I use, how I use it and exactly how I get these results. I also priced it at $9 (NINE DOLLARS!) so everyone who wanted to learn my system could afford to.

Swipe My System to Add 10,000+ Highly-Targeted
Twitter Followers Every Month 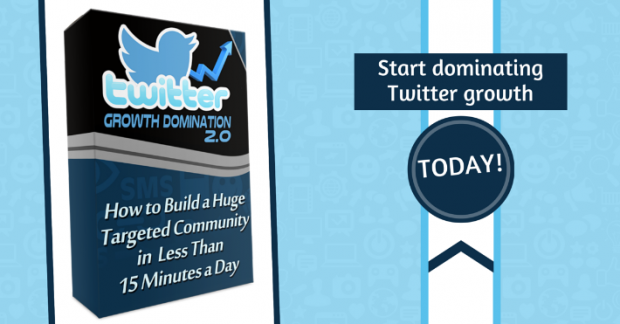 Well, if you believe the folks over at GeneralSentiment.com, that is how much my Twitter community is worth based on its “earned media value”. That places me at #4 on the list of 50 Most Valuable Social Media Influencers for 2015.

If you are okay with hitting “singles” and saving a ton of money on advertising and creating enterprise value while getting a ton of traffic, Twitter is for you and the answer is a big, fat YES!

Now let’s show you how to build own Twitter traffic and lead machine!

I said above that, in round figures, I tweet 100 times a day.

About 40 of those tweets are “engagement” tweets. I figured out a long time ago that I couldn’t possibly keep up with a third of a million plus followers, but I do engage with my community each and every day!

I tweet live for several reasons. First, being on Twitter is fun for me. I love engaging with my community and would do it even if I were not in the social media marketing field. That being said, I also want to make sure I do not miss business opportunities or chances to connect with industry influencers. I also want my followers to see that I am a real person and that they can reach me on Twitter. Most understand that I cannot get to everyone but appreciate the fact that I take time to be there.

I use tools that help me manage that process, identify opportunities and sort tweets out for me so I can get through 30-50 tweets in 30-40 seconds each. Total time on Twitter so far = 20 minutes/day!

There are 9 types of tweets that make up my Twitter sales and marketing strategy. I showed you the “Retargeting Tweet” above. Here are the 8 others: 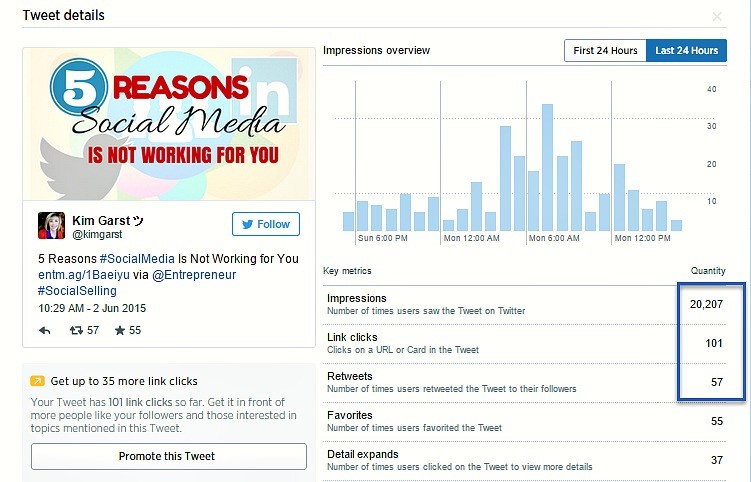 I have written 527 blog posts over the last 5 years. Over 300 of them are loaded into a single queue with one being posted automatically every 35 minute. 20,000+ impressions, 100+ link clicks and 57 retweets…for FREE! On Facebook that would be near miraculous right? It is common for me on Twitter and you can do it too! 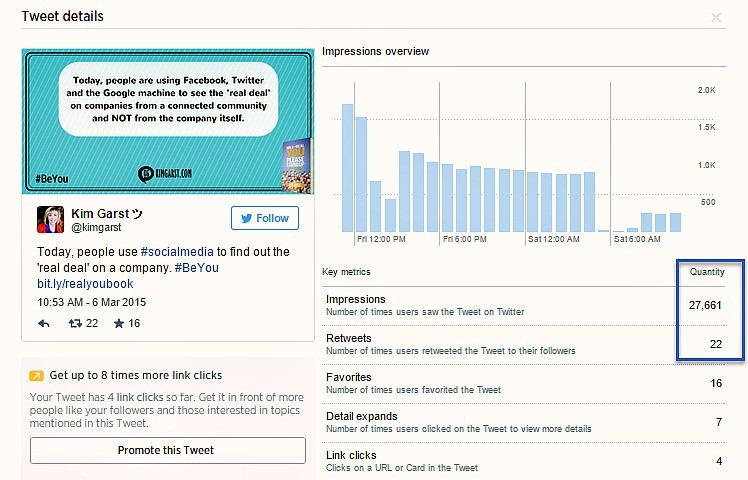 Can you tell I am selling you a book?

Tweets like this helped push my book to #1 in several categories for several weeks on the Amazon bestsellers list earlier this year. I turned quotes from the book into graphics and added a special hashtag, #beyou, that worked with the book’s topic. I received a ton of traffic, people liked the quotes and I sold stacks of books. 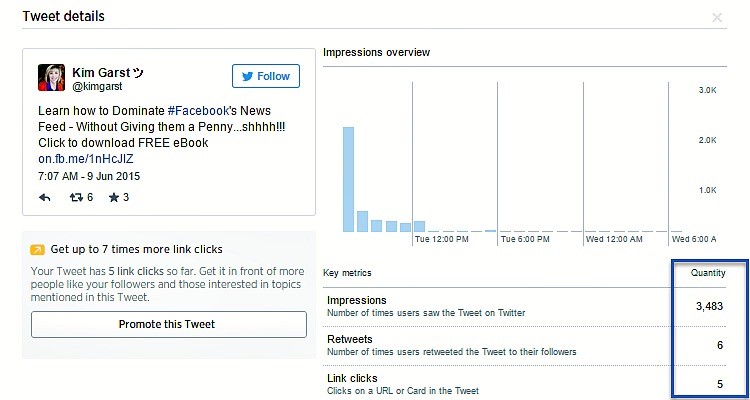 Is that a big deal? Yep!

Each eBook has an opt-in and leads into a sales funnel to a related product. I add approximately 5,000+ new tweeple to my list and get nearly as many sales leads every month without spending a penny on advertising.

This link is particularly clever as it takes you to a custom app on my Facebook Fan Page so I can engage with you and get you to join my community there also! 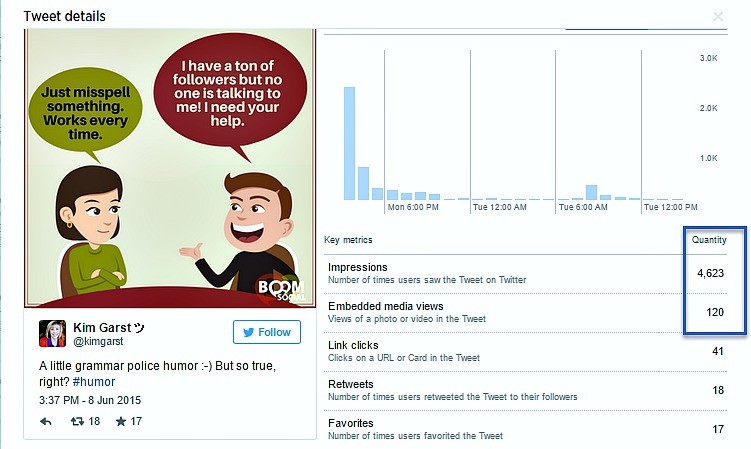 Social media is personality-driven and it is VERY possible to show your personality on Twitter. Look at the traffic and embedded media views. Also note that I include my branding at the bottom right hand corner of all my graphics. Yep, that is the logo for my company, Boom! Social. Brand impressions are HUGE in the marketing world and I make sure to get them everywhere I can. 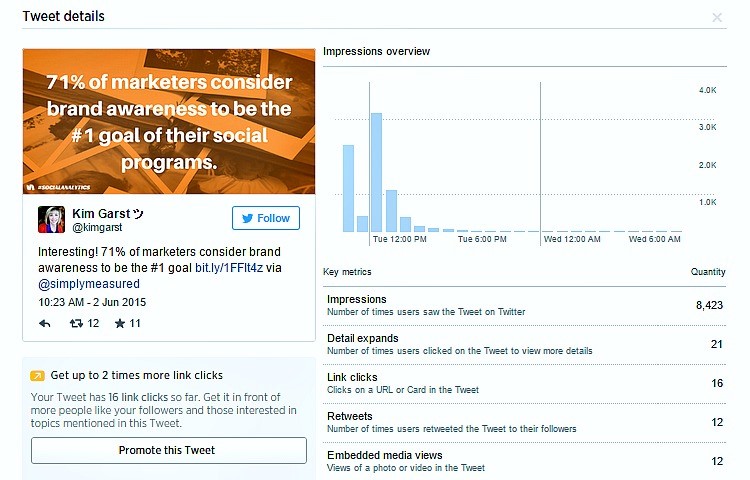 I also regularly tweet other people’s content as long as it is interesting and has value to my community. It shows that I am keeping up with content that matters to them and develops relationships with the people whose content I tweet. 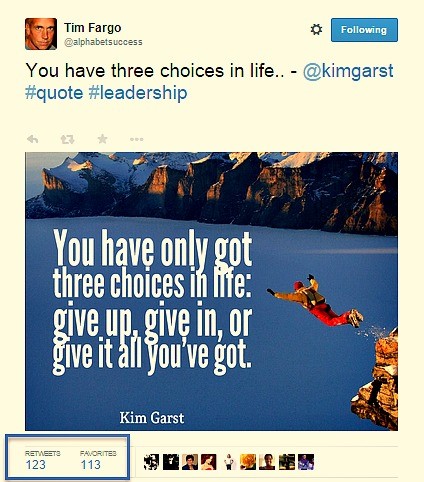 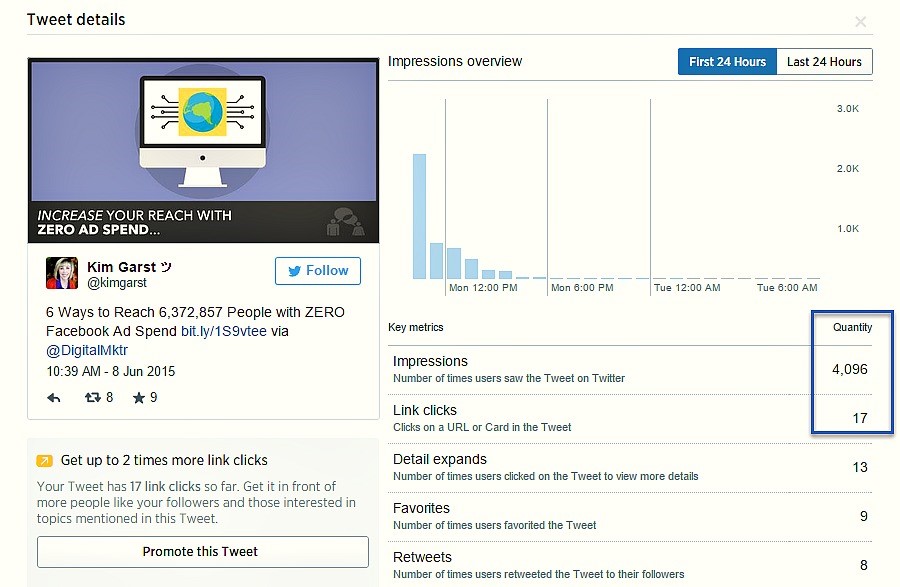 What a great way to build business relationships, seed my authority and generate traffic. When I do write content for other people I make sure to support traffic to that content on my social media sites. 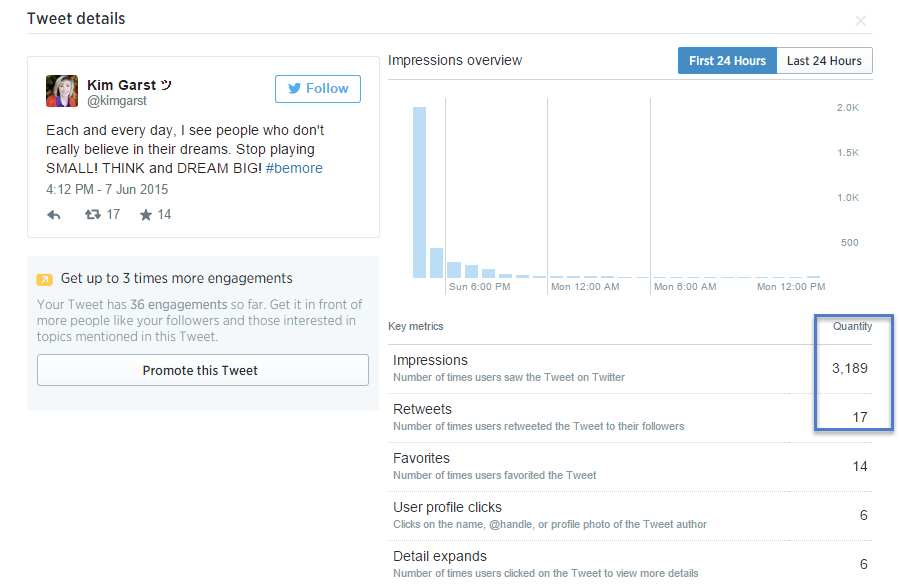 People LOVE tips! In the early days of social media I used to give tips on how to do various different things on each social media site. Now I give social selling, general business and leadership tips.

I very rarely will run a tweet directly to a product. I used to but I found out very early that it didn’t work nearly as well and generally just annoyed people. Companies that think of Twitter as just another “push” marketing tool invariable fail fast and quit Twitter.

I instead think of Twitter as a long-term relationship building tool I can use for traffic to my content and as an entry point to my free offers which then lead to sales funnels where I can sell them my products and services.

I also have lots of ways I streamline the process of building high-value relationships on Twitter, which really helps. One of those is by using Twitter lists to segment certain followers. You can read more about how I do that here: How to Use Twitter Lists to Build Relationships that Turn Into Sales.

I told you earlier that I would tell you how I did everything I do in an hour a day. So far I have told you that I spend the 20 minutes doing engagement using either Hootsuite or Sprout Social . I spend another 15 minutes doing growth using a couple of great (and cheap!) tools and a system I built and have refined over the last 6 years. That is all explained in my $9 mini-course, Twitter Growth Domination 2.0. The final 25 minutes are spent adding content to an auto-scheduler (I use SocialOomph).

I would love to hear your thoughts on Twitter as a business-building powerhouse, my strategy and how Twitter is helping you grow your business in the comments section below!

This site uses Akismet to reduce spam. Learn how your comment data is processed. 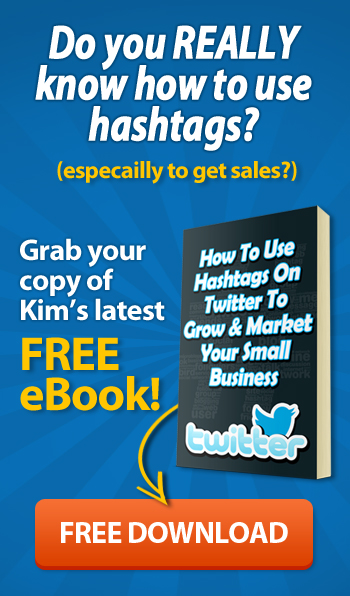